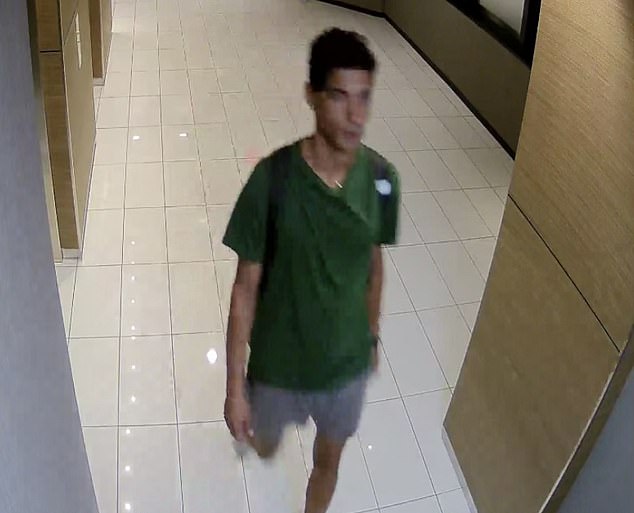 Monday’s office break-in at the campaign of Arizona gubernatorial candidate and current Secretary of State Katie Hobbs has been attributed to her Republican opponent.

Hobbs, the Democratic candidate for governor of Arizona, obliquely pointed the finger of responsibility at Republican opponent Kari Lake, stating that she has’spread deadly falsehoods and incited threats against anybody they see fit.’

Lake would not specify whether she would accept impending election results if it is decided she lost to Hobbs, adding, ‘I will win the election and accept the outcome.’

An unnamed individual was recorded on film approaching the front doors of the office. It is observed that he is carrying a backpack while wearing a green T-shirt and gray shorts.

The Arizona Democratic Party directly implicated Lake and the Republican Party for the break-in.

They wrote, “Make no mistake, this is a direct result of Kari Lake and fringe Republicans disseminating lies and hatred and encouraging violence, and it is abhorrent.”

Tuesday about 2:00 p.m., Phoenix police responded to a ‘business burglary’ at an office north of downtown Phoenix.

Monday night, Sgt. Brian Bower told KOLD 13 that the burglary occurred “sometime throughout the night.” He did not report the stolen property.

Lists of campaign volunteers and prospective plans for the final two weeks of Hobbs’ campaign might be taken from the office.

The office’s address is not made public because campaign volunteers have gotten threats indicating that the man who broke in understood what they were doing and what they were stealing.

According to a statement sent by Hobbs’ campaign manager, Hobbs and her staff had received “hundreds of death threats and threats of violence” during this campaign.

Lake asserted, during an interview with CNN’s Dana Bash, that he would win the forthcoming election: “I’m going to win the election.”

She stated, “And I will accept that result, because the people of Arizona would never support and vote for a coward like Katie Hobbs who refuses to debate.”

Lake stated, “In 2018, Stacey Abrams never conceded; she still hasn’t.” I did not hear CNN refer to her as an election denier.

It is protected by the First Amendment that we have the right to challenge our government and elections.

Lake, who is backed by former President Donald Trump, has adopted his assertions that the 2020 presidential election was stolen and rigged by Democrats to prevent him from obtaining reelection and instead elect Joe Biden.

Hobbs, who is competing against Lake for governor of Arizona in the midterm elections on November 8, has refused to participate in a PBS debate with her Republican opponent.

The Democrat claims that the debate would be a “spectacle” and told CNN on Sunday morning that her televised interviews are an acceptable substitute for a face-to-face discussion with Lake.

Hobbs stated of Lake, “She just wants a scenario where she can control the discussion.” She is the one that fears speaking with voters.

An early arrest of a man who threatened to kill Hobbs with a bomb corroborates a claim by Hobbs’ staff that they have received numerous death threats and violent threats.

James W. Clark, 38, of Falmouth, Massachusetts, was arrested by the FBI in July after threatening to detonate a bomb in Hobbs’ “personal space” if she did not resign.

The Associated Press stated that Clark’s threat was sent through the Secretary of State’s election department in February 2021.

Murphy Hebert, a spokesperson for Hobbs, stated that it was the only bomb threat her office had received out of thousands.

Herbert stated, “We hear the phrase ‘you should be hung’ frequently.” This appears to be a popular item.

According to the US Department of Justice, if he is convicted, he faces up to 10 years in jail and five years on two different crimes.

Hobbs stated, “It is unconscionable and weakens our democracy.” This harassment will not be accepted and cannot become the norm.