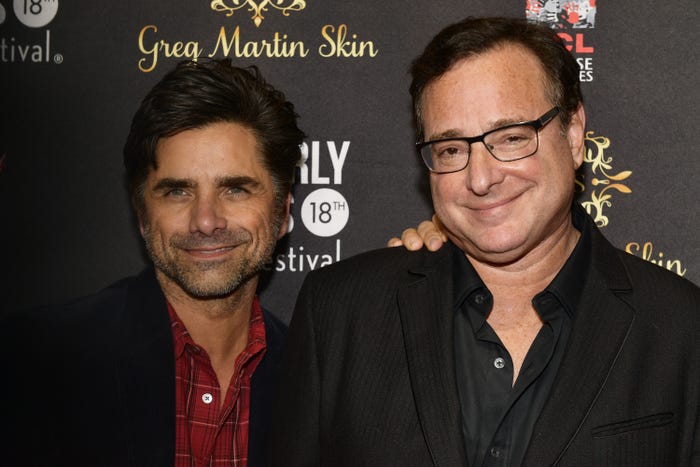 This past weekend, John Stamos took some time to commemorate his late friend and comic Bob Saget.

At Disney’s D23 Expo on Saturday, where he also announced the second season of his Disney+ sports series “Big Shot,” the actor discussed his connection with Saget, according to Deadline.

Stamos was seen becoming tearful in a convention video that was posted on Twitter as he spoke about a trip to Disneyland that he and his “Full House” co-star did before the actor’s passing. In January, Saget, 65, passed away.

“I don’t recall the rides we rode on or the restaurant we ate at, but I do recall the emotions we had. We enjoyed ourselves, laughed, and behaved like adults. We experienced the effortless, wordless affection that exists between adult men wearing odd pyjamas “On stage, Stamos remarked.

He followed by quoting a well-known Disney figure: “Any day I get to spend with you is my favourite day, according to Winnie the Pooh. My favourite days were the ones I spent with Bob, particularly the one in Disneyland.”

According to Deadline, Stamos said that Saget “never left everything on the table” and was “bombastic with his affection.” He asked the audience to “be present” as he concluded by asking them to do so.

“We can never get back the time spent with people, as you are aware. Such goodness is conceivable. There are kind folks willing to assist. We owe Disney this “said he. “I beg you, kindly let the love and happiness produced in this magnificent area inside to remain with us outside.”

Stamos has a reputation for being a huge Disney fan. As previously reported by Insider’s Gabbi Shaw, Stamos proposed to his wife Caitlin McHugh there. At Disney-owned facilities, the couple also had their honeymoon and their first anniversary celebrations.

The second season of “Big Shot” will debut on October 12, according to IMDb.