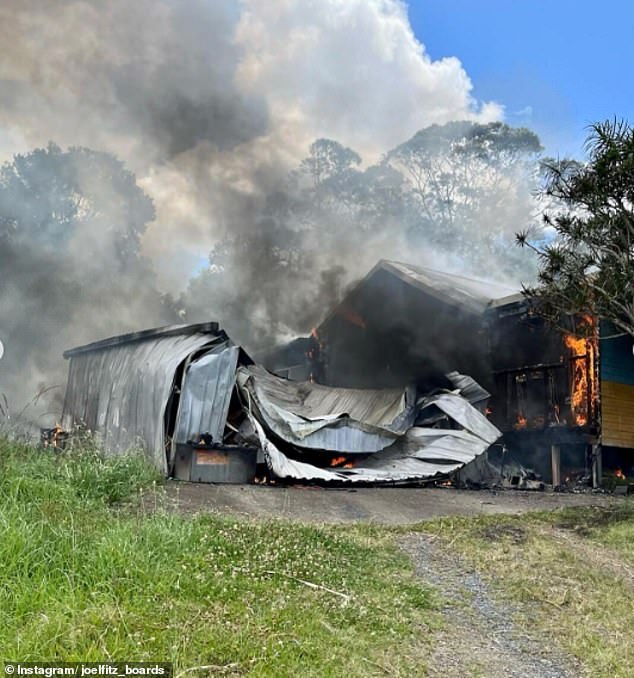 After flames overtook his “dream” house and it was burned to the ground, a former top surfer thinks he is fortunate to be alive.

Joel Fitzgerald’s house at Byron Bay on the NSW far north coast was completely destroyed by fire on Saturday night, but he was able to escape with a few priceless items.

Additionally damaged was a nearby shaping bay where a well-known surfboard designer earned his home.

As the grieving father of one gets ready to start again, the surfing community has come together to support him.

Fitzgerald has described in graphic detail how the house he and his small son Kainoa had called home for the last three years was soon consumed by the fire.

He also uploaded scary video of the fire overtaking his house and the burned-out ruins online.

Fitzgerald stated on Instagram, “The north coast dream was very much a reality and I was (grateful) in every way to have this small blue cottage.”

The emotions and sentiments that saying goodbye brings are a bit too difficult.

“My home on the hill is gone,” said the person, “I don’t believe I would have ever left it.”

A power surge or blown bulb produced by an electrical box problem may have caused the primary fire to start in the shaping bay.

The fire quickly grew into a huge inferno and spread to the neighboring house.

Before the fire consumed his property, Fitzgerald was able to preserve a flaming board, a picture of his kid, and a few other items.

Before scores of firemen came, he attempted to rescue the house with a garden hose, but it was too late.

I was quite fortunate not to die from the… fire, smoke, and bursting surfboard material and resin acetone drums. Fitzgerald recounted, “I salvaged everything I could in the minutes I had without putting myself in danger.”

Fitzgerald expressed gratitude to the courageous efforts of the firefighting teams from Lennox Head, Byron Bay, and Lismore to preserve his property.

He was happy that Kainoa was spending the whole night with his mother.

He reassured his followers at the conclusion of the heartbreaking message that he and his kid were “all okay” and advised them to take each day and each breath as it came.

It’s a new chapter now, the end of an era, and the phoenix will rise from the ashes, he wrote.

As he gets ready to start again, Fitzgerald will take some time off to be with loved ones and start replacing lost items.

Custom board requests will continue to be fulfilled by his Sydney manufacturing facility.

More than $4,000 has already been received via an online campaign to assist Fitzgerald in getting back on his feet so he can begin anew.

In a letter to the family, Joel’s brother Kye said, “Joel’s small blue cottage and shaping bay has been the location of fantastic moments for friends and family and, was, the inspired birth place of so many of Joel’s surfboards that we adore.”

Fitzgerald, the son of master board maker and inventor of Hot Buttered Surfboards Terry Fitzgerald, grew up in Narrabeen on Sydney’s northern beaches. He has toured the globe as a competitive surfer.