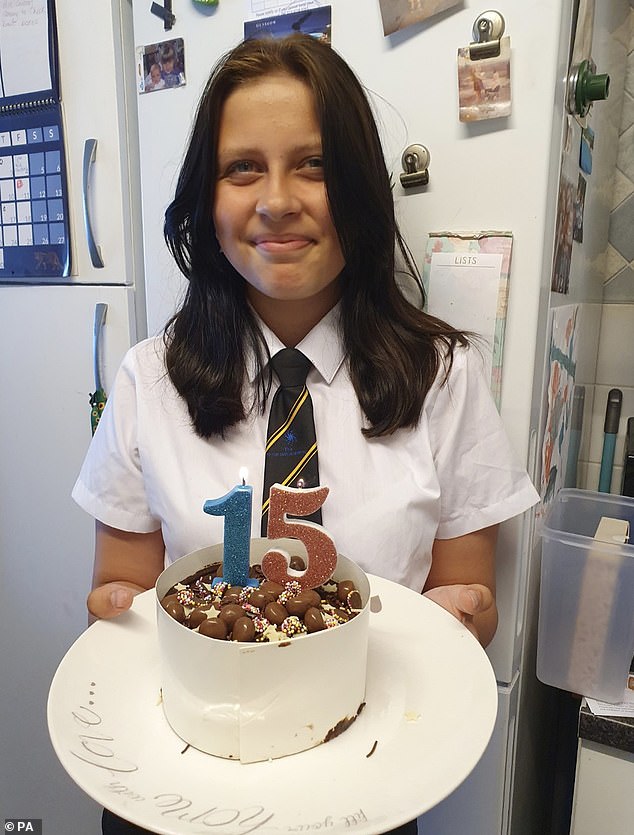 An inquest heard today that a 15-year-old girl died on the day she was scheduled to receive her Covid-19 vaccine after contracting the virus and rapidly deteriorating due to a ‘extremely unusual’ heart condition induced by the virus.

Jorja Halliday passed away barely hours after being admitted to the hospital with Covid myocarditis – inflammation of the heart muscle – to the horror of the medical staff.

The aspiring musician, a ‘healthy’ teenager, complained of aches throughout her Covid-19 treatment, but was otherwise first ‘comfortable’ at home.

Then, on September 28, 2012, the day she was scheduled to receive her vaccination, the schoolgirl’s mother Tracey rushed her to the doctor as her symptoms deteriorated, and she was admitted to the hospital immediately.

At the Queen Alexandra Hospital in Portsmouth, Hampshire, her deterioration was so swift and debilitating that her doctor remarked, “I’m not sure anyone could have survived that circumstance.”

An autopsy revealed that Jorja had’severe’ myocarditis, or inflammation of the heart muscle, caused by Covid-19.

Covid myocarditis in children is ‘very unusual,’ and Jorja’s case was so exceptional that doctors who treated her remarked that she is the ‘only child they’ve ever seen with this condition.

Dr. Nick Tarmey stated that the situation was that dire. Doctors were ‘horrified’ as they attempted to save Jorja but were unable.

Mrs. Halliday, 41, stated today at the Portsmouth Coroner’s Court following Jorja’s inquest that she will always wonder if her daughter would still be alive if she had received the vaccination sooner.

Jorja reportedly studied in her bedroom on the evening of September 23, but fell ill during the night.

Mrs. Halliday stated, “At 3:40 a.m., she texted me’mum’… She reported having widespread pain and being unable to sleep.’

She performed a lateral flow test as well as a PCR test while experiencing pain.

She reported feeling overall awful. Her mother stated that she was able to eat and drink a few items, but was extremely achy.

Her doctor recommended medicines since she exhibited symptoms of tonsillitis, and she finally began vomiting because she couldn’t keep food or drink down and her throat hurt.

Jorja had a “restless” night on September 28, and Mrs. Halliday was concerned about the vomiting, so they went to the doctor’s office.

On the doctor’s suggestion, Mrs. Halliday transported her to the QA Hospital at 2:00 p.m. after her resting heart rate was measured as 144 beats per minute.

After she was brought to the hospital’s Children’s Assessment Unit, doctors devised a strategy to induce a coma in order to transfer her to Southampton specialists; however, her heart rate plummeted.

Dr. Nick Tarmey, Critical Care and Anaesthesia Consultant, remarked, ‘She was very pale. She exhibited apprehension that she could not meet the demands of her body.

Before her heart rate dropped, Dr. Tarmey reported that it was 145 bpm, her blood pressure was ‘critically’ low, and her blood lactate was climbing to ‘very alarming’ levels.

Dr. Tarmey remarked, “She was terrified, not only of the circumstance, but also of the fact that something was gravely wrong with her body.”

“Her body was trying to keep up, and she was deteriorating rapidly.”

She appeared perplexed and irritated. We knew she was on the verge of collapsing because [confusion] occurs when the brain does not receive a sufficient amount of blood.

We were certain it was heart failure because her heart was unable to pump enough blood to the rest of her body owing to Covid. It would not be long before she experienced cardiac arrest.

This was a difficult circumstance because there were few ways to prevent the occurrence at that period.

Dr. Tarmey testified that he was “horrified” by the incident.

Everything we attempted would only buy us a few minutes. We were unable to reverse the situation and halt her heart’s decline.

We attempted numerous initiatives to assist Jorja, but she continued to deteriorate.

We were all appalled by what happened to Jorja.

He stated, “I have not treated any other children with Covid as a cause of myocarditis, which is consistent with how uncommon it is; I’m certain that the percentage of children who have had it is quite low.”

It is horrifying that so few diseases, such as myocarditis, produce such a rapid decline.

I’m not convinced anyone could have survived the situation.

The sad mother of Jorja testified at the trial, ‘From the moment we arrived to the time she died, her condition worsened so rapidly.

With the exception of performing a heart bypass, nothing could have been done to help Jorja.

If she had received the Covid vaccine sooner, would it have had a different effect? Would the result be distinct?’

Dr. Tarmey stated, “I honestly do not know. We know that the jab reduces the chance of severe problems; therefore, it is possible that the jab would also reduce the risk of these issues; however, I am extrapolating from the known advantages.

Coroner Sarah Whitby reached a verdict of natural causes, citing acute myocarditis associated with Covid-19 as the cause of death.

Ms. Whitby remarked, “It was astonishing how quickly the condition deteriorated.”

She deteriorated swiftly and died later that day as a result of Covid-19, despite her mother’s prompt intervention and the provision of necessary medical care.

Mrs. Halliday, from Portsmouth, stated that she will always wonder if an earlier vaccination would have altered the outcome.

She stated, “This will always remain a question in my mind. Would the outcome be different if she had it sooner?

It is a question no one can answer, and there are many what-ifs.

Mrs. Halliday, who has a tattoo of her daughter’s hospital heart trace over her own heart, stated that she hopes “the message gets out that Covid can do this to children.”

Mrs. Halliday, who wore a mask during the hearing, stated, “Many people adored Jorja; she is still spoken of.”

Every time one of Jorja’s four brothers or sisters celebrates a birthday, we send her a card.