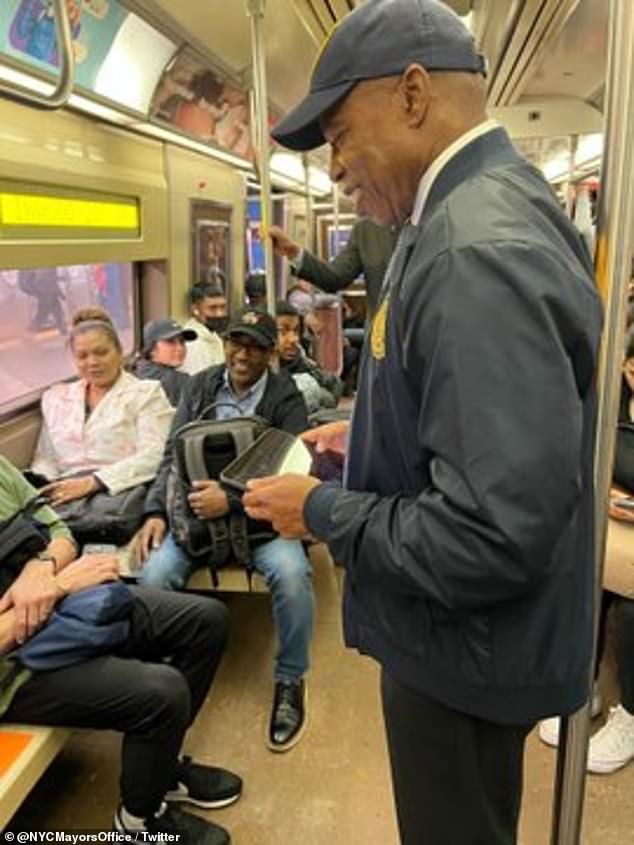 British singer Lily Allen captured NYC Mayor Eric Adams riding the city’s subway this morning as he put on a show of support amid a rise in violence.

In an effort to calm the public as violence on the New York subway system spikes, including a wave of horrifying “shoving” incidents, the mayor boarded the 6 train and welcomed passengers.

Lily Allen, the London-born singer who is wed to Stranger Things actor David Harbour, captured a photo of Mayor Adams on the train.

She wrote: “Oh hi Eric Adams @nycmayor on the 6” as the description for a photo on Instagram.

The mayor was reading from his iPad while holding a bottle of smoothie while donning a baseball hat and blazer with the municipal logo on it.

According to latest statistics from the New York Police Department, crimes on the subway are now up 41% year over year. Subway killings have also increased to their highest level in 25 years with nine recorded so far this year.

With 431 attacks registered as of October 16 compared to 370 at the same time last year, assaults on the subway system are also up 17% from the same period last year.

Even as he and New York Governor Kathy Hochul stated they will increase the number of police officers patrolling the system, Mayor Adams asserted that there is merely a “perception” that violence is out of control on the subways.

Adams met commuters and police officers while traveling this morning, as documented by official images posted by his office.

The Metropolitan Transit Authority of New York City has petitioned state justices to impose a block on sex addicts and those who target workers and to bar thugs who attack other subway riders from using the system due to the increase in violence.

On Monday, Chairman Janno Lieber urged state officials to extend 2020 legislation that forbids individuals convicted of sex offenses on the subways or of attacking transport workers to those who harm other passengers.

In his letter, Lieber urged New York State courts to expand a 2020 statute that permits judges to prohibit someone from accessing public transportation if they are found guilty of engaging in unlawful sexual activity while using the system or of attacking MTA staff.

Lieber said in his letter to New York State District Attorneys in the metropolitan region, “The present legislation is simply overly limited.”

He then requested that district attorneys select personnel to collaborate with the MTA legal department and advocate for a strategy of “pursuing transit bans in appropriate situations, including through plea deals.”

The New York Police Department was able to locate the career criminal who was shown on security tape Friday pushing an innocent bystander over the subway rails hours after the letter was written.

Authorities claim that on Friday at the Wyckoff Avenue and Myrtle Avenue subway station in Brooklyn, Lamale McRae, 41, pushed 32-year-old David Martin into the rails of the northbound L train.

Security camera captured him seeing Martin, dressed in a black jacket and pants, walk by on the packed track while wearing a yellow sweatshirt underneath a black jacket.

In order to make sure there are no police present, McRae drops the gray bag he was carrying and checks both ways before sprinting and tackling Martin, using his shoulder and hand to knock the victim to the ground.

Martin then tripped and fell over the busy subway tracks, leaving his sunglasses behind.

The assailant then sprints back to where he left his bag before making his getaway via the turnstiles.

Martin now has a swollen face and a shattered collarbone. His mother says that he is so traumatized that he is suicidal.

After Heriberto Quintana, 48, was hit by a F train in Queens on October 17, he is now the 13th person to be forced into the subway lines in New York City this year.

The mayor has resisted acknowledging that crime on the subway is an issue.

Adams recently stated: “We have an average of fewer than six crimes a day on a subway system with 3.5 million commuters on his new program Who’s Talking to Chris Wallace.”

However, if you build your article on a narrative, you’ll examine those six crimes and feature them on the front pages of your newspaper each day.

So I have to cope with those six felony offences and the appearance of terror every day.