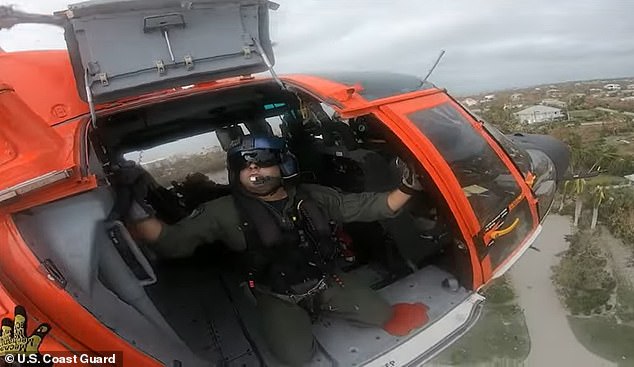 The U.S. Coast Guard has published amazing video of them flying about in the wake of Hurricane Ian, saving people from their driveways as they swooped over Florida.

The brave MH-65 Dolphin Crew is shown in a U.S. Coast Guard video flying to Sanibel Island, which was almost shut off after Hurricane Ian’s wind and storm surge destroyed it.

It led to a large rescue operation, some of which were shown in a video that the rescuers shared online.

Petty Officer 2nd Class Tyler Kilbane, who is equipped with a GoPro on his helmet, is dropped into one of the storm-devastated communities where he discovers a young guy named Colin, his grandmother, and the family dog standing in the driveway of their house.

“You performed well!” Kilbane told the duo while praising them for utilizing a reflector to attract the crew’s attention.

The inhabitants respond that they were unaware of any other people who may have been abandoned in the area when the guardsman asks them if they were aware of any.

The rescue basket was initially filled with the lady, who was then lifted several hundred feet above the ground and put into the helicopter.

In order to be taken to safety, Colin, Kilbane’s grandson, and the family dog were the next to board the basket.

The group then moves on to rescue another couple who are stranded in residences that are submerged in floods.

Tyler alerts them to the fact that thousands need rescue.

He suggests that they prepare a bag with dry clothing and keep in mind to include their IDs, wallets, and telephones.

The household cat is taken with the couple as they flee via an open window before being hauled away as well.

According to the Coast Guard, the rescue attempt is comparable to a military operation. Some people have been forced to use mirrors and shards of glass to signal for aid from the ground since not everyone has access to telephone connections.

In a different rescue, a guy extends Tyler a cordial handshake upon his arrival. With trees all around it that have fallen, the neighborhood looks destroyed.

Rick, the husband, enables his wife to enter the basket first.

She is given ear plugs to wear and is promised that “they’ll take care of you” before the rescue basket of the helicopter lowers to enable her to board.

He cries, “Hang on tight!” as he lifts her away.

The next person to exit their destroyed house is her husband, who is just wearing a t-shirt, shorts, and a baseball hat.

He is walking up a road that is caked in sand that the storm surge has swept ashore while the helicopter can be seen hovering overhead.

Before being reunited with his wife on the helicopter, he looks at Tyler one more for confidence as the basket descends and he climbs inside.