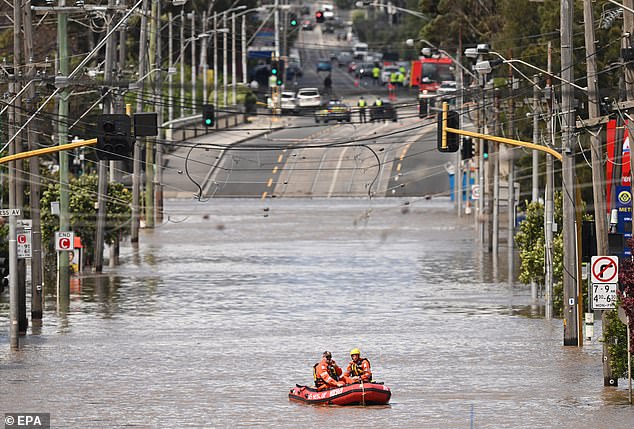 Australia is expected to have a heavy rainstorm starting on Sunday after only one day of sunlight.

Another system of low pressure and trough is expected to reach the nation, bringing with it extensive rain and storms that might lead to more severe floods.

Kevin Willis, 71, was identified as the first victim of Victoria’s floods, which have also forced thousands of residents to flee, early on Saturday.

In the next days, another 100mm of rain is expected in Australia’s eastern states.

The forecast office reports that rain and thunderstorms are already forming in South Australia and interior Queensland. The weather system is expected to return the south-east on Wednesday with “far more extensive” rainfall and “renewed floods,” according to the weather office.

With heavy floods projected to continue for up to six weeks and a growing list of municipalities facing evacuation orders, the news is especially troubling for Victoria.

The body of Mr. Willis, the first victim of the floods, was discovered in the garden of his home on High Street.

At a news conference on Saturday, Victorian Premier Daniel Andrews said: “It is my sad duty to have to disclose that a 71-year-old man has been discovered dead in the backyard of his residence in Rochester.”

We will support that family and all other families impacted by this, but it simply drives home to us all how serious and possibly deadly this is.

“Hopefully that sends a wider message of exactly how important this is and why we are all working as hard as we can to make sure people are protected,” she said.

The dead as well as a lady who was unhurt but trapped inside the property were both rescued by emergency services on Saturday, according to a statement from Victoria Police. “Access to the area was challenging given the surrounding floodwater,” the police department said in the statement.

His death’s precise circumstances are still under investigation.

The Campaspe River, one of several streams that broke their banks and submerged northern Victorian towns, inundated hundreds of dwellings in Rochester.

The River peaked on Friday night at 115.7 AHD, which is 300mm higher than the previous record set in January 2011.

According to Mr. Andrews, 500 more houses are presently isolated and 466 have flooding over the flooring.

He said that 344 roads were also closed as a result of floods.

In the previous 24 hours, there had been more than 350 rescue operations.

On Saturday, Mr. Andrews said that 3,000 applications for emergency compensation from Victorians had already been received.

Jonathan How, a senior forecaster with the Bureau of Meteorology, told Daily Mail Australia that Tasmania, Victoria, and NSW will only have a “few days of relief.”

According to him, a developing weather system “will begin to bring showers and thunderstorms throughout South Australia and inland Queensland from Tuesday and then stretch to the whole of the east coast from Wednesday to Saturday”.

He forewarned that “this will be much more pervasive.”

“Therefore anticipating extensive falls that might result in fresh floods for certain areas of the south-east and east.”

According to Mr. How, northern NSW and south-east Queensland will get the greatest rainfall.

Although farther south is still susceptible to significant local rainfall that is expected to accompany thunderstorms, he predicted that area would have between 50 and 100mm of rainfall.

»Heavy rain to pour in Australia«