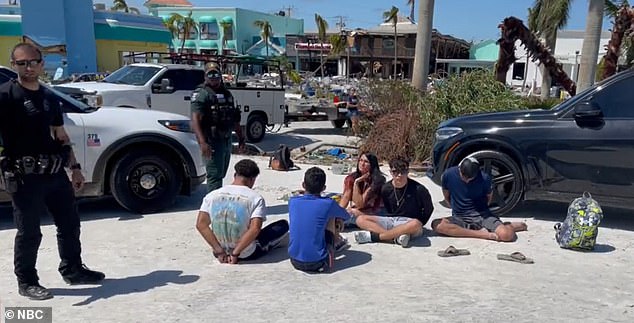 Police in Fort Myers handcuffed and arrested a group of teenagers for allegedly stealing establishments in a hurricane-ravaged region.

A local reporter uploaded on Twitter a video of five teens with their heads down as they were chastised by police. Three of the teenagers were cuffed.

The incident was recorded on camera by NBC2 reporter Gage Goulding, who was informed by officers that the kids were being detained for shoplifting on Fort Myers Beach.

This week, Fort Myers is among the Florida cities severely damaged by Hurricane Ian.

After making landfall with some of the greatest windspeeds ever recorded for a hurricane on U.S. soil, the storm flooded portions of both of Florida’s coastlines, tore houses from their foundations, destroyed beachside businesses, and left more than 2 million people without electricity.

More than a dozen fatalities have been verified, with the death toll sure to grow further.

Before the hurricane, the sheriff of Lee County, Carmine Marceno, issued a warning against looting in the approaching mayhem. Lee County contains Fort Myers, which was damaged by the storm.

However, the severe warning evidently failed to deter a group of Fort Myers teenagers who were detained only one day after the hurricane.

The sheriff has said categorically that there will be zero tolerance for anyone who ‘go out there and loot or prey on people during this horrific event.’

Ahead of the storm, Marceno said, ‘For any of those individuals that think they are going to go out there and loot or prey on people during this horrific event — you better think twice’.