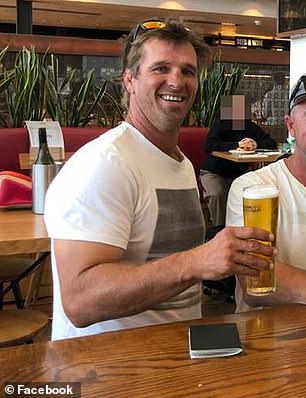 The brother of NSW Waratahs coach Darren Coleman has been charged with another offense after being detained in connection with the alleged deadly one-punch assault on a former professional surfer.

After allegedly striking Chris Davidson, 45, outside the South West Rocks Country Club on the NSW Mid-North Coast shortly after 11 p.m. on Saturday, Grant “Grub” Coleman, 42, has been charged with assault resulting in death.

According to reports, Mr. Davidson struck his head after falling to the ground, rendering him unconscious. He received care on the spot before being transferred to Kempsey Hospital, where he was soon declared dead.

Coleman, who was taken into custody roughly 30 minutes after the alleged attack, appeared in Kempsey Local Court on Monday; there, bail was officially denied without a request being made.

Additionally, he is now facing a fresh accusation of choking the victim.

Both Coleman and Mr. Davidson, who represented Australia in surfing, were natives of the region and well-known as legendary athletes.

The defendant was raised in South West Rocks when their late father, Greg “Whale” Coleman, a former Penrith Panthers player, accepted a post as a player-coach for the then-Kempsey Cowboys in the early 1980s.

Coleman has been a longtime participant in the neighborhood athletic scene and was extensively interested in football together with his three brothers, Darren, Scott, and Matt.

The gifted athlete, while in his teenage years, competed for the North Coast in the under-18 class in 1997, when they won the Ray Maher Shield finals.

Coleman played on the squad and went on to manage the Macksville Sea Eagles Rugby League Club for four straight seasons until 2012.

He played four years ago with the South West Rocks Marlin Magpies, and in February 2018 he returned to the squad as captain.

Since August of last year, he has been actively engaged in coaching the Smithtown Tigers, a junior rugby side that has been developing the sport’s future stars.

Coleman’s mother Elaine earlier told the neighborhood newspaper The Macleay Argus that her four kids have been involved in football for many years.

In August 2021, she said, “They’ve all been involved in sports consistently. Two (Scott and Darren) converted, but they all ended up playing for the Gaolers — I recall Scott, Matt, and Grant being a part of a 19’s triumph.”

They often poke fun at Darren over the holidays because he hides himself in his room with his laptop and has a phone continuously in his ear. However, their criticism has paid off.

In the meanwhile, condolences have begun to flood in online for Mr. Davidson, who won the Rip Curl Pro at Bells Beach in Victoria in 1996 by defeating American surfing great Kelly Slater in back-to-back heats.

Mr. Davidson, who was just 19 at the time, had entered the tournament as a wild card.

Along with a photo of Mr. Davidson, Slater posted a tribute on Instagram with the words “Lost another soldier yesterday.”

Had several successful battles with this person. one of the most gifted surfers I’ve ever met.

Mr. Davidson, according to a different acquaintance, was “taken too soon.”

She replied, “Thinking of your many friends throughout the globe and of course your family.”

Such a crazy, loving person who will be greatly missed. Davo, RIP

Mr. Davidson was described as “one of the most skilled surfers” he had ever seen by a family acquaintance who had known him since he was 14 years old.

“He was a wild boy with a golden heart!” He was a lovely child and my pal. an unnecessarily shortened life.

My sincere sympathies to the family and friends.

Police have not disclosed information about what they think caused the incident that resulted in Mr. Davidson’s death.

At this time, Mr. Janke said he has not received instructions to file a bail application on Coleman’s behalf.

Coleman’s next court appearance is scheduled on November 23 at Kempsey Local Court.