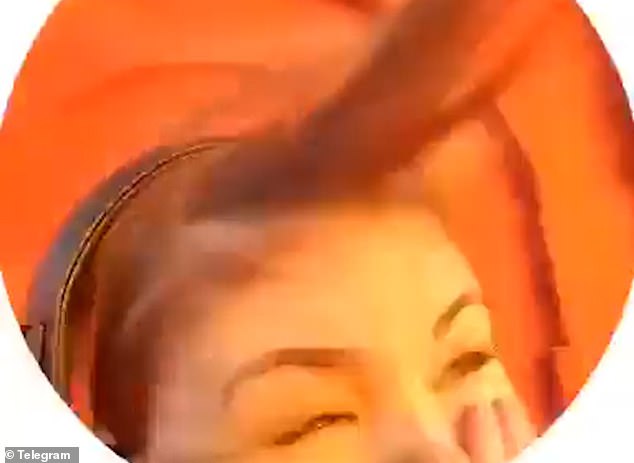 When a rocket detonated close to a young lady in Kyiv today while she was shooting a message for her friends, she narrowly avoided death.

The video was released while Vladimir Putin, the president of Russia, bombarded Ukraine with missile strikes this morning, striking Kyiv, the country’s capital, and murdering people in retaliation for an explosion that destroyed the Crimea Bridge on Saturday.

According to early reports, at least eight people were killed and 24 wounded in only one of the attacks on Kiev, according to Rostyslav Smirnov, a consultant for the Ukrainian ministry of internal affairs.

It was fortunate that the lady in the video wasn’t one among the casualties.

She was seen strolling down the street with headphones on, shooting her video message while acting frightened and covering her lips. A towering, terracotta-colored wall is seen to her right.

She obviously says to the camera in Ukrainian, although her original statement is muffled by her hand and the sound of traffic. I heard it, but I was stopped.

Over her, a jet’s roar can be heard suddenly, followed by an explosion.

Her skin and the background are illuminated by the red light of flames, and the blast’s shockwave fluffs her hair.

She crouchs down to shield herself from the explosion. The sky is filled with debris.

The lady, who is obviously upset, covers her mouth, screams softly, and then runs away from the explosion scene down the street, seeming uninjured.

The lady was strolling down a sidewalk close to the Taras Shevchenko National University of Kyiv, as indicated by the colored wall.

If the University was the intended target of the attacks remained unknown.

Monday morning at approximately 8 a.m., when people are commuting to work and kids are leaving for school, missiles struck the capital.

According to Mayor Vitali Klitschko, explosions have been reported in the Shevchenko sector of the city, a sizable region in the heart of Kyiv that is home to the city’s ancient town and several administrative buildings.

According to a snapshot released on Twitter by Ukrainian parliamentarian Lesia Vasylenko and the young woman’s video, at least one explosion happened close to the main building of the Kyiv National University in downtown Kyiv.

Following the first early-morning attacks on Kyiv, later on, further loud explosions were heard as Russia’s offensive was stepped up, perhaps heralding a significant escalation in the conflict.

Russian troops fired at least 75 missiles at Ukraine on Monday morning, according to the commander of the Ukrainian armed forces, with lethal attacks aimed at the country’s capital Kyiv and towns in the south and west.

“The terrorist nation, Russia, has used attack drones along with large missile and airstrikes on Ukrainian land.

The adversary fired 75 missiles in the morning. Our air defense shot down 41 of them,” General Valeriy Zaluzhny said on social media.

Except for Crimea, which Russia has invaded, air raid sirens could be heard across Ukraine. Four hours straight were spent with the sirens.

According to President Zelensky, a combination of rockets and suicide drones assaulted the Ukrainian towns of Dnipro and Zaporizhzhia in the south, Kharkiv and Sumy in the north, Zhytomyr and Vinnytsia in the center, and even Ternopil and Lviv in the far west.

Even as the assaults persisted, Zelensky said that the Russians were targeting people and power plants in an effort to “sow fear and disorder.”

He said, “Russia is attempting to wipe us off the face of the planet,” but vowed that such measures would fail.

The attacks, according to adviser Mykhailo Podolyak, demonstrated “the Kremlin’s terrorist inadequacies” after a run of humiliating war losses.

According to Ukraine’s defense minister Oleksii Reznikov, “the only thing they destroy is the future of [Russia]—a future of a widely loathed renegade terrorist state.”

As authorities reported that the missiles struck close to a well-known monument to a prominent politician, near a children’s play area in a park, and close to a pedestrian bridge, videos and photographs from the Ukrainian capital showed burning automobiles and corpses in the streets. More video revealed a burning apartment building in Dnipro.

Despite the fact that Russia did not immediately provide an explanation for the attacks, it is quite likely that they were part of a show of force after a big explosion destroyed the Kerch Bridge.

Putin referred to the explosion on the substantial bridge that connects Russia to the Crimean peninsula as a “terrorist attack” planned by Ukrainian special forces.

In response to requests from hardliners within the Russian elite that he launch a full-scale war and use nuclear weapons, the dictator of Russia is scheduled to convene with his security council today to plan his vengeance.

Putin’s spokesperson Dmitry Peskov denied on Sunday that using nuclear weapons was a possibility, but with the seized parts of Ukraine now annexed and hundreds of thousands of soldiers enlisted, Putin is out of alternatives for escalating the conflict. He hasn’t indicated that he will capitulate.

Multiple victims’ remains were discovered at an industrial location on the outskirts of Dnipro city by journalists working in the city’s center. Glass was all across the roadway because windows in the neighbourhood had been blasted out.

Other sites where explosions were reported by Ukrainian media included Kharkiv, Ternopil, Khmelnytskyi, Zhytomyr, and Kropyvnytskyi, which has served as a haven for many people fleeing the conflict in the east.

Due to a recent Ukrainian counteroffensive, the Kremlin is suffering from humiliating combat defeats in regions it is attempting to conquer.

Putin had referred to the assault on the Kerch Bridge leading to Crimea as a terrorist act carried out by Ukrainian special forces the day before. Putin said that “there is no question it was a terrorist attack intended at the destruction of vitally essential civilian infrastructure” in a meeting with the head of Russia’s Investigative Committee on Sunday.

The Kerch Bridge is significant to Russia strategically since it serves as both a military supply route for Russian soldiers in Ukraine and a symbol of its claims to Crimea.

The longest bridge in Europe, measuring 12 miles (19 kilometers), has not yet been assigned blame for being damaged.

Volodymyr Zelenskyy, the president of Ukraine, said on his Telegram account during the attack that Russia is “trying to annihilate us and wipe us off the face of the world.”

He added, “Please do not leave (bomb) shelters.” “Let’s hang on and be resilient.”

After the attacks on Kyiv, several citizens were spotted walking the streets with blood on their hands and clothing. A doctor bandaged the head of a young guy sitting on the ground wearing a blue jacket.

The front of a woman’s clothing was covered with blood, and she had bandages on her head. Additionally, other autos suffered partial or total destruction.