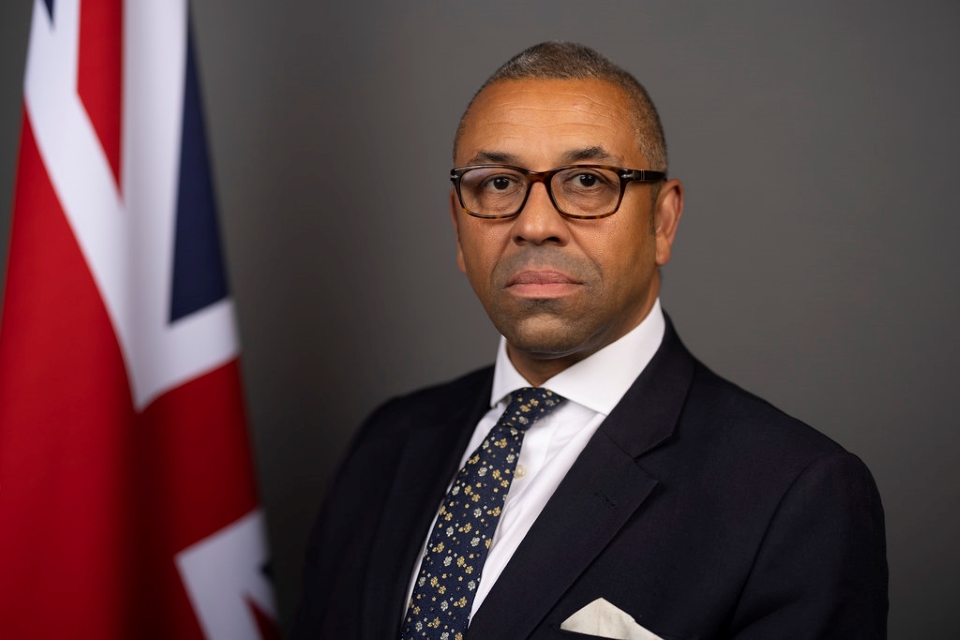 Huge thank you for giving me the opportunity to speak with you this afternoon – and it has been a bit of a whistle-stop tour, Japan, Korea and here in Singapore.

Our High Commissioner highlighted the fact that I laid down an early marker that I was interested in international relations in my first speech in Parliament. But actually, my interest pre-dates that quite significantly.

Because I’ve always loved maps. And I particularly loved the maps that I grew up with as a child.

Perhaps because the maps that I looked at when I was a child had my house right in the centre. And the reason is, because I grew up just literally metres east of the Greenwich meridian.

So, perhaps, now, it is no surprise to you that I much prefer globes. Because, because globes remind us that there is no middle, there is no edge, there is no centre, there is no periphery. Every country is at the centre of its own world.

And that we are all connected, that we all share opportunities, but we also have a duty to share the challenges.

And I’m going to talk, in this speech perhaps more about challenges than opportunities. But I want you to understand – I am an optimist at heart. I know that the opportunities are many, and they are great.

But the challenges that we all face are diverse, and they are significant.

Disease, and ill health. Terrorism, and war – epitomized most recently by Russia’s brutal, illegal, and unjustified invasion of Ukraine.

So when we look at our maps, or indeed our globes, we have a choice. We can either see a world divided, or we can seek to explore those things that bind us together. And we can choose to recognize that geography matters less – and it is our values that make us Neighbours.

We can see the countries which choose to be committed to trade and commerce, to those which stand up to oppression and coercion, those which seek to tackle climate change, those which look to innovation and technology to make the future better than the past.

And those countries form a grid, form a network, they form partnerships. The UK is committed to overcoming the challenges that I described by reinforcing those grids, strengthening those networks, building more and deeper partnerships.

The High Commissioner highlighted the fact that I’ve only been in the job for three weeks. Immediately prior to that, I was the Secretary of State for Education – for nine weeks. I’m hoping to outlast that appointment.

Firstly, sadly, at the occasion of the funeral of Her Late Majesty Queen Elizabeth II. Then in the heady, speed-dating environment that is the UN General Assembly in New York. Where more than 190 countries come together to discuss ways to strengthen global resilience, improve food security, and boost international investments.

Now the UK is part of many networks – NATO, the Commonwealth, G7, G20 to name but a few. But we are looking to build on those pre-existing networks, to improve our partnerships. And our relationship with the Indo-Pacific is central to tackling those issues that I’ve just described, and our relationship with this region will be a driving force for a positive vision of growth and security in all our countries.

Last year, in our Integrated Review, we set out our ‘Indo-Pacific Tilt’, underlining the strategic importance that we place as the UK upon this region. And it’s a region critical to our economy, to our security and to our ambition to support open societies.

Let me describe the region in a couple of statistics. At least 1.7 million British citizens live across the region. Our trading relationships are worth over 250 billion dollars and they’re growing. In the decades to come it will be the crucible of solutions to many of the pressing global challenges that we face – from climate and biodiversity to maritime security and geopolitical competition linked to our rules and norms.

Now the Integrated Review is a document. And it’s easy to put words on a page, or put lines in a speech. But I want to make it clear that we are committed to making the Indo-Pacific Tilt more than just a slogan, make it more than just rhetoric. That’s why we applied for, and secured, ASEAN Dialogue Partner status.

The UK recognizes the centrality of ASEAN to the region and the essential contribution it has made to peace, prosperity and security.

And we take our responsibility to support those efforts seriously.

This includes working with partners to ensure that other initiatives complement, rather than conflict with, the central role of ASEAN.

We were the first European country to secure a Comprehensive Strategic Partnership with India. And we intend to be the first European country to accede to the CPTPP. It will give the region access to the UK’s world-class financial services sector as well as, as well as the world’s sixth largest economy. That’s why engagement between the UK and Indo-Pacific needs to cover the broadest spectrum of activity.

So let me highlight the areas where we think this relationship matters.

We all want to provide jobs for our young people and opportunities for our businesses.

The UK is pursuing a low-tax, high growth economic strategy to deliver exactly this. And we are also working closely with countries in the Indo-Pacific to drive prosperity and growth through new trade opportunities.

We have signed Free Trade Agreements with Australia and New Zealand – and we are working intensely to agree one with India soon.

Within six months, we negotiated a Digital Economy Agreement with Singapore. It sets the standards in removing friction and increasing confidence in digital trade.

And just last week, over 20 of our top tech companies were here in Singapore: and when they went home, they took with them new customers, investors and signed a number of joint ventures. And we are keen to do more. Our focus is on strengthening collaboration in science, technology, research and development – just as we have done here in Singapore.

But we cannot talk about economic cooperation without also talking about climate. And the importance of our relationships in the region to accelerate the world’s transition to net zero. I felt that strongly in the conversations that I had at the Partners in the Blue Pacific initiative at the UN General Assembly.

And earlier today I met the head of our new regional hub of British International Investment here in Singapore. BII, as we call it, is the UK’s development finance arm.

And through it we intend to spend up to £500 million in the region over the next five years. We will work with public and private partners in the region to support quality, green infrastructure projects in Indonesia, in Vietnam, in the Philippines, in Cambodia, and in Laos. We have also committed up to £110 million to the ASEAN Catalytic Green Finance Facility, to boost renewables, to boost clean transport, and to boost other sustainable infrastructure projects.

Secondly, our focus on defence and security. The Indo-Pacific Tilt also means recognising that security and prosperity in the Indo-Pacific are indivisible from Europe’s. We welcomed the condemnation of Russia’s violations of the UN charter and the decisions by many countries in the region – including Singapore, Japan, and the Republic of Korea – to impose sanctions on Russia for its aggression. Russia’s violation of the UN charter sets a dangerous precedent for the whole world.

Peace and stability in this region matters in the UK. 60% of global trade passes though shipping routes here in the Indo-Pacific, so security here has a direct impact in households in the UK. And we are working with partners in the region to promote maritime security and uphold the UN Convention on the Law of the Sea. It is 40 years old this year but it still continues to play an essential role and supports ASEAN’s own security strategy.

The UK has lots to offer as a defence partner. Our Prime Minister has committed to increase defence spending to 3% of GDP by 2030.

Alongside the US, we are bringing world-leading submarine technology through our AUKUS partnership to support Australia’s defence and security capabilities, and this will bolster regional peace and stability.

And the UK is working with partners across the Indo-Pacific to strengthen cyber security and secure critical national infrastructure.

Including with ASEAN through their dedicated centre here in Singapore.

Thirdly, partnership through our values. The UK and many Indo-Pacific countries are committed to shared values. Our commitment to sovereignty and territorial integrity, and freedom from economic coercion. Our shared beliefs in the value of democracy and open markets.

The UK is committed to working with partners, old and new, in defence of those values. Which is why we support ASEAN’s efforts to restore peace and democracy in Myanmar. And it’s why we have worked so hard to respond robustly to Russia’s invasion of Ukraine.

Because as I said in the Security Council chamber last week… if Ukraine’s sovereignty and territory are not respected, then no country can feel itself truly secure. This region’s commitment to those values has been on show at the United Nations in recent months, where it stood shoulder-to-shoulder with other countries around the world to condemn Russia’s invasion.

The international rules-based system doesn’t only protect our freedoms and security. It protects fair trade, and it protects us online.
And when we join the CPTPP, as I hope we soon will,
we will approach this work and our membership in the spirit of cooperation, looking to protect people’s interests and freedoms.

Now it would be impossible to give a speech in this region and not mention China. And I was pleased to meet Foreign Minister Wang Yi in New York last week. It’s important to talk even where we disagree. Actually, especially when we disagree.

Because China is a major global actor and driver of growth. It has lifted literally millions of people out of poverty. But, the lessons I take from watching China across my lifetime, is that when China departs from global rules and norms, when it aligns itself with aggressive countries like Russia – its standing in the world suffers. Now China will always have a choice about the direction that it wants to take.

But one thing that is certain is that the UK Government will always stand up for our sovereignty and economic security – and that of our partners.

And no UK Government will ever turn a blind eye to repression, wherever it occurs.

All of the achievements that I’ve outlined today are products of partnership. And the UK is working with friends and partners to address the challenges that we face but also to seize the opportunities ahead of us. And we are well on our way to becoming the European partner with the broadest, most integrated presence in the Indo-Pacific. I am here to make it clear that the Indo-Pacific Tilt is here to stay. It is permanent.

We have gone from strategy to delivery. From economic theory to signing trade deals. From security discussions to deploying our Carrier Strike Group. From talking about our values to standing together in the face of Putin’s invasions. And if you take nothing from this speech other than what I’m about to say, then I would be comfortable with that. Because what I’m about to say, is that the UK will remain a committed, reliable partner to this region. Thank you.