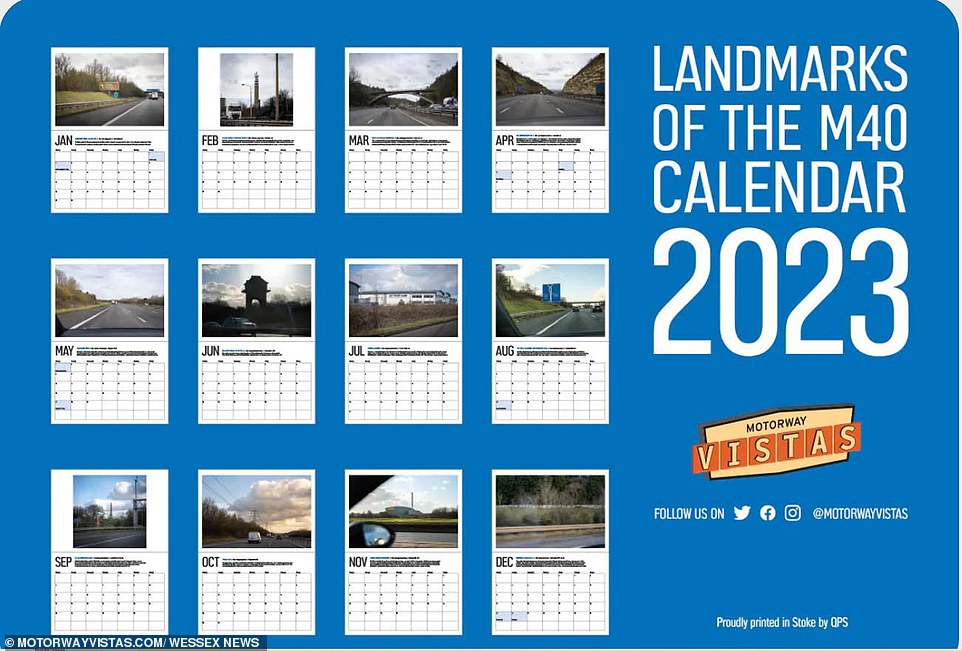 The niche 2023 calendar depicting sights along the road between London and the Midlands is now available for purchase, and its authors claim that they have been bombarded with inquiries.

The ‘Landmarks of the M40′ calendar offers photos of various landmarks for each month, such as Stokenchurch Gap near Princes Risborough and a series of pylons between Banbury and Oxford, commonly known as Pylon Alley.

The £7.99 calendar also features Middleton Stoney Water Tower, the Umerslade Obelisk, and the Prodrive factory near Banbury. The calendar may be purchased online.

During one of their numerous trips between London and Stoke-on-Trent, Michael Lee and Jim Thornton, who both occupy senior positions at VCCP Partnership, came up with the concept.

They frequently decried the featureless terrain along the M40 and challenged themselves to locate a calendar’s worth of sights that every commuter would recognize.

Mr. Thornton stated that the business engaged to create the initial run of the calendar described it as “the strangest thing [they] had ever printed.”

“I’m extremely pleased with that remark,” he remarked. You want to create something absolutely unique, and we’ve accomplished that.

“Like the majority of the British Isles, if you look hard enough, the M40 winds through a historical paradise in all its peculiar British glory.

The research on the landmarks has rekindled our appreciation for the British countryside and the M40 in particular.

Mr. Thornton and his team at Motorway Vistas, the publishing company responsible for the calendar, hope that “hundreds of thousands of M40 drivers feel the same way and purchase it.”

In addition to the photographs, the calendar includes information about the places and context.

Mr. Thornton’s business colleague, Mr. Lee, remarked that they had a difficult time picking which twelve photographs to add.

“We sought ones that the majority of M40 drivers would recognize and that were visible from the driver’s eyeline,” he explained.

It felt like cheating to picture something so far away on the left, so we took all of our photographs from the automobile.

If this calendar is a success, we will conduct a poll to determine the next freeway for which we will create a calendar.

Peter Beddow, the project’s photographer and designer, captured the images.

He explained, “I don’t own a car, so when Michael approached me with the concept, my initial objective was to put myself in the mindset of the typical M40 commuter.”

I enjoy how the photographs tell the story of all the minor accomplishments that keep you going till you reach your goal and celebrate them.

I also realized immediately that the design had to emphasize the visual language of the highway system, including its colors, fonts, and detritus. Upon seeing how everything came together, I am convinced that we have lifted the bar.

Especially when it comes to gifts associated with highways.

Angie Allgood, the managing director of Motorway Vistas, stated, “We’ve received so much interest even before our official launch.”

People who were fortunate enough to get a pre-launch copy have requested additional copies.

She stated that the calendar would be a great Secret Santa present for coworkers or a “long-suffering commuting friend… or true motorway nerd’.

Let’s face it, it’s far more intriguing than any dog or garden-themed calendar.

After the self-proclaimed “dullest man in Britain” released his own calendar showcasing the country’s top car parks, including a ghostly war site, one costing just 15 pence per hour, and another with a cocktail bar, the latest unique calendar was revealed.

The 70-year-old man gathered his 12 favorites into a candidate for the most tedious calendar of 2023, which is solely devoted to parking garages.

After selling prior humdrum calendars depicting roundabouts, benches, and mailboxes, the car park aficionado devised his most recent plan.

In order to distinguish out from the throng, he takes satisfaction in showing aspects of British society that traditional calendars never do.