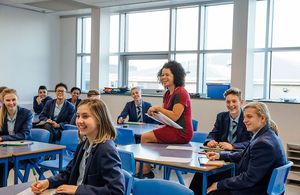 GCSE, AS, and A level exams in England will largely return to pre-pandemic arrangements next summer as young people continue to recover from the pandemic.

In line with the plans set out last September, Ofqual has confirmed a return to pre-pandemic grading in 2023.
To protect students against the disruption of recent years, and in case students’ performance is slightly lower than before the pandemic, senior examiners will use the grades achieved by previous cohorts of pupils, along with prior attainment data, to inform their decisions about where to set grade boundaries.

This mirrors the approach used in the first years of reformed GCSEs and A levels in 2017, when early cohorts were protected against the impact of changes to the qualifications and means, for example, a typical A level student who would have achieved a grade A before the pandemic will be just as likely to get an A this summer.

The government is also confirming that students should continue to be provided with support in GCSE mathematics, physics and combined science with formulae and equation sheets, but not with advance information of exam content, as was the case last year.

The decisions reflect the reduced levels of disruption this cohort have experienced compared to the cohorts of the previous two years. Ofqual has launched a consultation on the plans for formulae and equation sheets today.
Education Secretary Kit Malthouse said:

Students working towards their qualifications next year expect fairness in exams and grading arrangements, which is why we are transitioning back to pre-pandemic normality.

Schools are doing a great job in supporting students to catch up and get back on track including through the National Tutoring Programme, which continues to provide one-to-one or small group tuition to students that need extra help.

This summer was an important step back towards normality. Our plans for 2023 take us a step further, whilst also recognising the impact of Covid.

I’ve visited schools and colleges up and down the country and I’ve seen young people’s admirable resilience and dedication. Giving the 2023 cohort some protection against any impact of Covid disruption is the right thing to do. Our approach to grading in 2023 will provide a soft landing for students as we continue the process of taking the exam system back to normal.

Ofqual already announced earlier this year that pre-pandemic arrangements for non-exam assessment, fieldwork and practical science have been reinstated. The department confirmed at the same time that schools and colleges this year will be teaching the full content of qualifications to students taking exams in 2023.

Ofqual does not expect any further adaptations to be used in VTQs. Awarding organisations are expected to take account of the approach, including in relation to grading, used in general qualifications so that students taking VTQs are not advantaged or disadvantaged in comparison.
UCAS Chief Executive Clare Marchant said:

We welcome today’s announcement by the Office of Qualifications and Examinations Regulation (Ofqual).
As an independent charity, UCAS’s aim is to help students make informed decisions about their future that are right for them, whether pursuing university, college or an apprenticeship, and this early clarification means students will be able to apply with confidence in the 2023 cycle.

Higher education admissions is becoming more competitive, with a 1/3 increase in 18-year-olds forecast to apply by 2026. This decision will support teachers and advisors in giving the best guidance to their students, as well as enable universities and colleges to make offers with certainty.

David Hughes, Chief Executive of the Association of Colleges, said:

The move back to a grading profile in line with pre-pandemic levels, with some protection, is the right thing to do now. It gives certainty to everyone in the system – students, parents, teachers, advisers, employers – but we also need to be alert to the ongoing impact that pandemic lockdowns have had for many young people on mental health, confidence and study skills and make sure they get the support they need.

A series of further consultations relating to qualifications next year and in future years has also been launched today:

The department and Ofqual are jointly consulting on guidance to schools and colleges about gathering assessment evidence to support resilience in the general qualifications system. The guidance proposes schools and colleges gather evidence in a way that aligns with their normal arrangements for preparing students for exams, helping ensure preparedness should a scenario ever again arise where it would be unsafe or unfair for students to sit exams.

The department and Ofqual are both consulting on plans to remove the expectation that students engage with unfamiliar and abstract material, such as unfamiliar vocabulary, within modern foreign language (MFL) GCSE assessments from 2023 onwards. The Department’s consultation covers the curriculum, while Ofqual’s covers how it is assessed.

The Joint Council for Qualifications (JCQ) are consulting on the exam timetable for next summer, which seeks to maintain some of the space built into the exam timetable last year between the first and last exams in the same subject. This spacing was well received by schools and colleges in 2022 and reduces the chance of students missing all exams in a subject due to circumstances such as illness.

The department’s decisions on next year’s arrangements reflect that schools remained open to all pupils through the last academic year, with this year’s cohort having the opportunity to benefit from time in the classroom with teachers and interventions such as the National Tutoring Programme, compared to students from the previous two cohorts.
The government is investing nearly £5 billion to support students’ recovery from the impact of the pandemic, including £1.5 billion for tutoring programmes and almost £2 billion in direct funding, largely targeted at those that need help most.

Over 2 million courses have now started through the National Tutoring Programme, including 1.8 million so far across an estimated 80% of schools – helping children to catch up with learning loss.