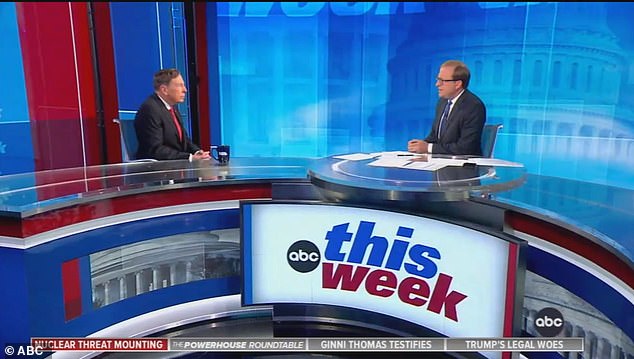 An ex-CIA director warned that if Russian President Vladimir Putin utilized nuclear weapons in his conflict with Ukraine, the US and NATO allies would annihilate Russian troops.

Putin’s nuclear threats must be taken seriously, according to David Petraeus, who made an appearance on ABC’s “This Week” on Sunday. Petraeus also said that Putin is “desperate” because the “battlefield reality he confronts is irreversible.”

Earlier this week, Putin issued an order to forcibly seize portions of Ukraine.

Days later, however, Russia was had to withdraw its forces from Lyman, a key strategic location that is one of the four districts of Ukraine that Russia seized.

Putin proclaimed the West to be “Satanic” and promised to use all of the power at the Kremlin to defend Russia’s new territory as he signed the order. Many others took the comment to be a nuclear threat.

Despite the fact that Ukraine is not a member of NATO, according to Petraeus, a “US and NATO reaction” would be appropriate.

He explained to presenter Jonathan Karl that it may be possible to interpret the chance that radiation from a nuclear bomb would reach a NATO nation as an assault on a NATO member.

There must be a reaction because this is so terrible; it cannot go unanswered.

Just as an example, we would lead a NATO-wide operation to destroy every Russian conventional force that we can see and identify on the battlefield in and around Crimea, as well as every ship in the Black Sea, as our response.

On Sunday, Ukraine asserted complete control over the eastern logistical center of Lyman. The region marks its largest combat victory against Russia in recent weeks, offering a possible staging location for more eastward incursions while increasing pressure on the Kremlin.

Russian casualties during the retreat were probably high. Before the Ukrainian invasion, Russia had between 5,000 and 5,500 soldiers in the town, according to a Ukrainian military official on Saturday.

In the conflict, which is now in its ninth month, more than 60,000 Russian soldiers have perished.

The seizure of the town, where Ukrainian flags were flown over municipal structures on Saturday, according to NATO Secretary General Jens Stoltenberg, proved that Ukraine is capable of driving Russian soldiers from the area and highlighted the influence of its use of cutting-edge Western weaponry.

Petraeus said on Sunday that “President Zelensky and Ukraine have mobilized substantially better than has Russia.” Incomparably better than Russia, Ukraine has recruited, trained, equipped, organized, and used its soldiers.

He remarked, “I believe the combat reality he confronts is irrevocable. No amount of shambolic mobilization—that is the only way to put it—no amount of annexation, and no amount of even sublimated nuclear threats will be able to save him from this specific predicament.

There will eventually need to be acknowledgement of it. As President Zelensky said, “the final result” will need some kind of initiation of discussions at some time.

In contrast, Petreaus said that in reaction to the annexation, “Russia was hammered by a thousand more individual, personal, and other sanctions,” “proving that the west still has more that can be done to Russia.”

It might possibly be worse for Putin and for Russia, he warned further. And nothing will alter this, not even the tactical deployment of nuclear bombs.

However, he said, “You must take the danger seriously.”

Additionally, Petraeus said that he did not believe Russia could prevail at this time.

They are unable. At this point, Putin is unable to do anything.

‘Mr. Putin is not subject to any controls. Austin said to Fareed Zakaria GPS, “You know, he might make another mistake just like he made the foolish decision to attack Ukraine.

But at this time, I can’t think of anything that would convince me that he’s made such a choice.

Videos purported to show Russian forces dragging unarmed Ukrainian citizens to the polls to decide whether to submit to Moscow’s rule.

We’ve said it before, but this referendum is a fraud. It’s made up. And neither the majority of the international community nor we will ever recognise their illegitimate takeover of Ukrainian land,’ Austin said on Sunday.

The Pentagon chief stated, “This nuclear saber rattling is not the type of thing we would expect to hear from leaders of major nations with capabilities.”

Although he recognized that Washington and Moscow had had high-level discussions on the subject, Austin claimed that he had not recently talked to his Russian counterpart.

Austin stated, “I’ve spoken about this exact subject and urged not to go down this road and perform this sort of reckless activity.”

“So, sure, I personally have done that in the past, but I haven’t spoken to him lately,” you say.

Petreaus admitted to ABC that he had not discussed the potential US reaction to a nuclear escalation from Russia with national security advisor Jake Sullivan.

He clarified that the Article 5 of the alliance, which calls for a collective defense, would not be activated if Russian troops utilized nuclear weapons in Ukraine. Because Ukraine is not a member of NATO, a “US and NATO reaction” would nonetheless be appropriate.

In a statement released in the evening on Sunday, the Ukrainian military claimed that its forces had repelled Russian advances in a number of locations, particularly in the Donetsk region close to Bakhmut and Spirne, just inside Donetsk region, and close to Lysychansk, a significant city in the nearby Luhansk region.

In May, Russian troops overran Lyman from Ukraine, and since then, they have been exploiting it as a supply and transportation center for their operations in the Donetsk region’s north. Since Ukraine’s quick counteroffensive in the northeastern Kharkiv area in September, its recapture by Ukrainian forces represents Russia’s greatest combat defeat.

According to Serhiy Gaidai, the governor of nearby Luhansk, control over Lyman might prove to be a “key element” in helping Ukraine recoup lost ground in the area. Moscow declared the region’s complete conquest in early July after weeks of relentless assaults.