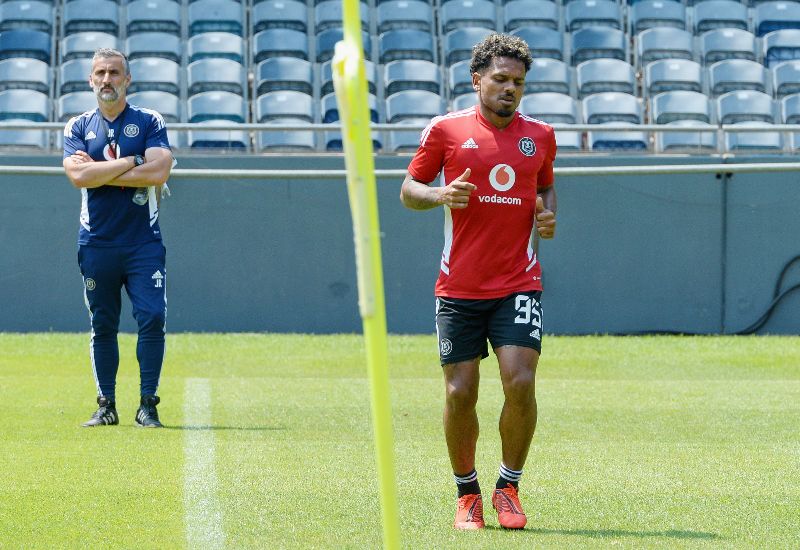 Kermit Erasmus has happy recollections of his last league match against rivals Kaizer Chiefs, and having recently returned to the Buccaneers, he now has the opportunity to add to those memories.

This coming weekend, the Buccaneers will welcome their old rivals at FNB Stadium in the season’s inaugural Soweto Derby. Several players from both teams will be experiencing the famous rivalry for the first time.

While the 33-year-old can be considered a new acquisition for the home team, as he re-signed with the Club last month, his experience in the storied match sets him apart from the rest of the club’s recent signings.

Erasmus is excited to get another go at one of Africa’s most heated football rivalries, almost seven years to the day after a brilliant performance against Amakhosi in which he assisted on all three Bucs goals in a 3-1 victory.

In an exclusive interview with Orlandopiratesfc.com, he stated, “The occasion is special, and it is a privilege and an honor to be a part of it again now that I’m back home.”

“Obviously, scoring three goals in a 3-1 victory brings back great memories for me.”

“Everyone discusses the individual brilliance that led to the goals, but for me the team’s overall effort and the atmosphere stand out. This is the recollection that people constantly bring up while discussing the Kentucky Derby. We hope to provide our fans with a similar experience this weekend.”

Pirates enter Saturday’s matchup with a bit of momentum after two consecutive victories, the most recent of which came against Erasmus’ former side, Mamelodi Sundowns, in which he scored a goal.

He has emphasized the significance of maintaining consistency during the approaching series of games, which includes not just the Derby but also a crucial cup final.

The player continued, “We must build on our past performances and strive for consistency, as being consistent allows you to accomplish a great deal.”

Erasmus is aware of the uniqueness of his feat in modern football. He follows in the footsteps of legends like as Jomo Sono and Jerry Sikhosana, who led the list of players who wore the skull and crossbones again after a brief absence.

He describes his return as a special experience that will bring smiles to the Bucs’ fans’ faces.

Erasmus stated, “I don’t believe anyone has done what I’ve done in a very long time.”

“Especially returning to a Club such as Pirates. It’s a terrific feeling, and I’m pleased to be back bringing the ‘Happy People’ back to happier times. This is the most important thing to me right now.”

Saturday at 15:30, the much awaited Soweto Derby will commence.