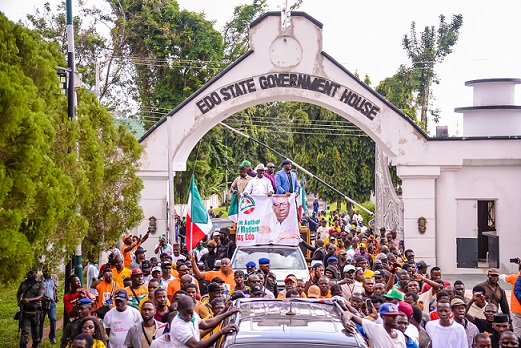 After three weeks of annual leave, the governor of Edo State, Mr. Godwin Obaseki, returned to Benin City, the state’s capital, on Tuesday. Supporters and other Edo citizens gave him a loud welcome.

Obaseki was also in Osun State, where he was instrumental in Senator Ademola Adeleke of the Peoples Democratic Party (PDP) winning the governor’s race there last Saturday.

Along with other government officials, PDP members, and his deputy, Rt. Hon. Comrade Philip Shaibu, the governor was welcomed.

Shaibu acted in the governor’s stead while he was away.

Obaseki said, “I think the PDP victory in Osun clearly shows that the election of 2023 is PDP’s to lose. We will not take it for granted. There is quite a bit of work to do; we need to go back home to talk to our brothers and sisters and improve the spread of the party’s membership.

“We are going to make sure that we come together and work together because victory is certainly ours.”

“If we could win in Osun state, I see us winning the 2023 elections and going to Aso Rock,” he added.

Hailing Edo people and PDP faithful for their undying support for his administration, Obaseki noted, “I owe PDP a lot of gratitude for letting me into the party when they did and I believe as a loyal party member, it is my responsibility to contribute my own quota to the growth and development of the party and that is exactly what we did in Osun.

On his absence from governance during his leave, he said, “I did not miss anything because I have a very competent acting governor who was able to cope with the security challenges, issues of flooding and all the things that happened while I was away.”