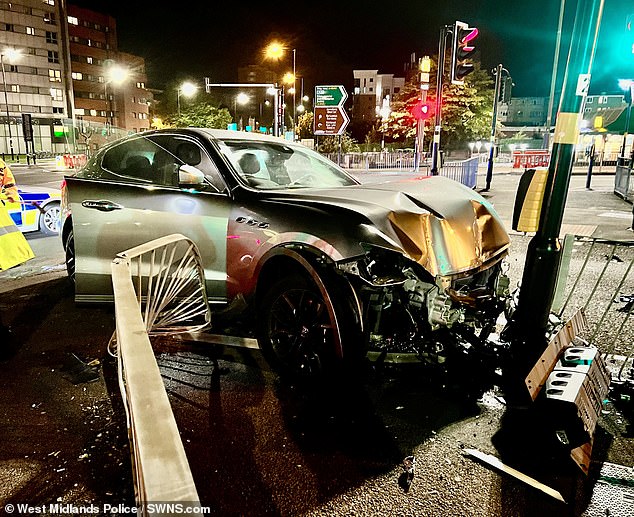 An intoxicated motorist lost control and crashed into a series of traffic lights, totaling a $70,000 Maserati Levante supercar.

Pictures of the damaged silver vehicle, which has a peak speed of 187 mph, after it struck a traffic signal post and demolished a set of railings, are horrifying.

Following the collision on Sunday early, the West Midlands Police posted images of the incident as a caution against drunk driving.

‘This is an excellent illustration of the hazards of alcohol driving,’ the police tweeted.

The motorist was detained after a positive breath test result and minor injuries because he refused to provide a sample while in prison. DontDrinkDrive.’

The driver was criticized on social media by individuals who said he had “more money than wisdom.”

Unreal, I hope these pictures haunt him for years to come, but I bet it’s not the first time he’s done it, as one commenter put it.

Another person said: “Wealth brings entitlement, and entitlement brings privilege, and privilege brings the freedom to do anything you want. NOT. Plead the Fifth.

A third person said, “I believe the phrase’more money than sense’ was developed for this wealthy half-wit.