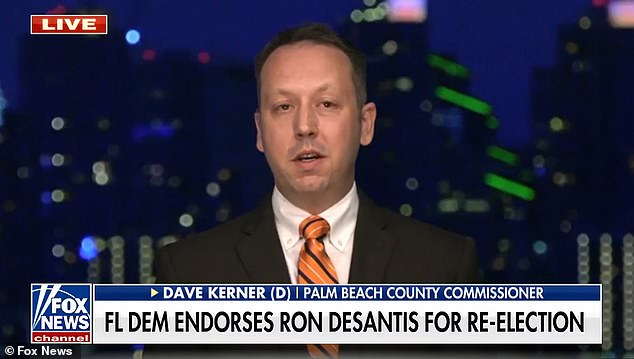 Republican Governor Ron DeSantis of Florida has received the public support of a Democratic Florida commissioner in his re-election campaign.

In a passionate endorsement on Fox News, Dave Kerner, 39, who has previously won four elections in the strongly Democratic Palm Beach County in the south of the state, refuted claims that he had abandoned his party.

Since I turned 18 and registered to vote, I have always identified as a Democrat. I don’t really consider that to be in opposition to my party. I’m a Floridian first and an American. But there are other factors coming together,” Kerner said before listing the reasons DeSantis had won his support.

“The destiny of our state, which I discussed when I gave him my support, his backing of law enforcement, and his handling of the COVID-19 epidemic.” I supported him for a variety of reasons,’ Kerner said.

There has definitely been a lot of what I refer to as “shadow support.” Clearly, Florida’s governor, Ron DeSantis, is doing an outstanding job. Although he is America’s governor, he has a large following.

“You know, what you did was a courageous deed, and you should be proud of it.” The issue is unrelated to anything I did. The Florida governor’s track record of public service is at issue. Kerner attempted to downplay his change of heart by saying, “But ultimately, it should not be an act of bravery and should not be seen as an act of heroism.

At a gathering held at the Palm Beach County Police Benevolent Association earlier in the week, Kerner heaped adulation on the governor while singing his praises.

From 2004 until 2007, Kerner served as a police officer for the city of Alachua.

Before his 2016 election to the County Commission, he spent two terms in the Florida House of Representatives and is now a lawyer.

Kerner was subsequently re-elected to the commission in 2020; but, due to term restrictions, he cannot run in 2024.

We are a state that is progressing, and I give our governor a lot of credit for that, according to Kerner.

‘Making this decision was not tough for me. This was not the ‘lesser of two evils’ as the saying goes. Gov. DeSantis has shown himself to be more than deserving, and he has done it with a level of respect, decency, and purpose that is lacking in today’s public discourse.

During the early phases of the COVID-19 epidemic, Kerner, who now holds the rotating position of Palm Beach County mayor, lauded DeSantis for his efforts during the public health emergency.

“I collaborated with him to safeguard not only our physical health but also our emotional and financial wellness.” He remarked, “I stood with him while we made sure our businesses and schools remained open.”

While other states, such as California, issued shelter-in-place orders, DeSantis worked hard to keep Florida open for business by lifting all limitations and lockdown regulations by September 2020.

According to DeSantis’ statement, “No one understands that better than Dave, who served Florida’s communities. We are focused on protecting victims and not coddling offenders.”

“Commissioner Kerner recognises the critical role that our local law enforcement personnel play in maintaining Florida’s safety and is intimately familiar with the danger posed by the Defund the Police campaign.”

DeSantis has gained notoriety in the media as he considers running for president in 2024 as a potential Trump successor.

Antagonizing the COVID-19 lockdowns, making fun of Biden’s age and abilities, fining Disney World for opposing a new state law restricting discussion of LGBTQ issues in schools, and most recently flying Venezuelan immigrants from Texas to Martha’s Vineyard are just a few examples of how DeSantis, a combative governor, has used his power to gain national attention.

DeSantis also singled out Palm Beach County when the school board insisted that pupils wear masks to school during the epidemic, despite his executive order banning such restrictions.

President Joe Biden will conduct a campaign event in a state where he lost the 2020 election next week for the first time as president.

In recent weeks, Biden has participated in political gatherings in Democratic bastions like Maryland and New York, but next Tuesday’s grassroots rally in Orlando is anticipated to provide a glimpse into how he could present the case for his reelection.

Trump, the former president, has long been thought of as the Republican front-runner in 2024, but according to recent surveys, DeSantis is doing better in Florida.

According to Democratic sources, Biden would use his rally to criticise extreme Republicans like DeSantis as a danger to democracy in an effort to capitalise on outrage over the Supreme Court’s decision to overturn the precedent-setting Roe v. Wade ruling that secured women access to abortions.

In Florida, Biden’s poll ratings are still negative, but Republicans say they support his visit.

In Florida, a Democrat last prevailed in a presidential or senate contest in 2012.

Republicans had a 5.2 million to 4.9 million voter registration edge in Florida. However, there are already 3.9 million unaffiliated voters, who are becoming a more significant portion of the electorate.