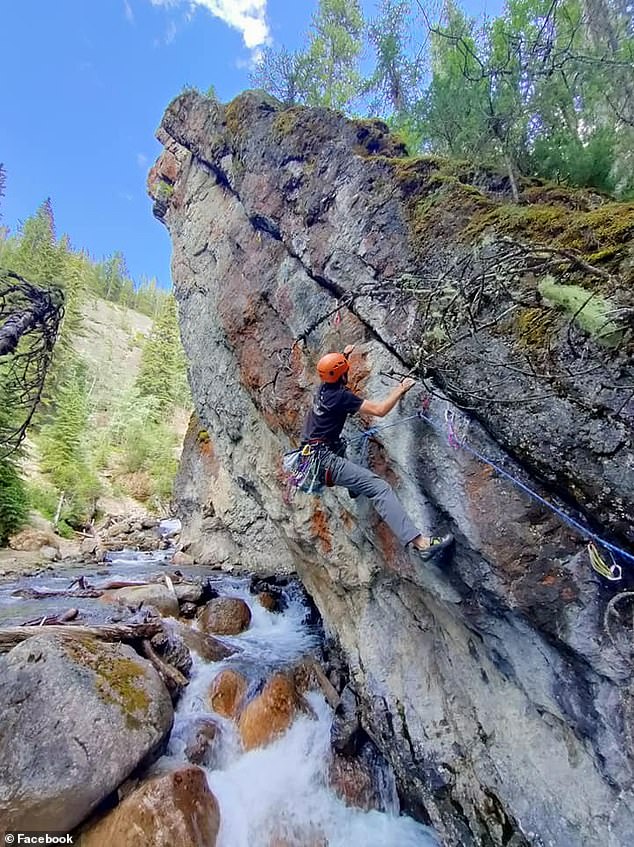 An Australian adventurer perished in his wife’s arms in Canada following a freak rock climbing mishap.

Daniel Heritage, 28 years old, plummeted to his death in Calgary’s Rocky Mountains on Wednesday, only months after he and his wife Emma embarked on a vacation of a lifetime.

Ms. Heritage has documented their hiking vacation on Facebook with scores of photos of her husband swimming, rock climbing, hiking, and appreciating Canada’s breathtaking alpine scenery.

Jessica Bartel, her identical twin, disclosed that her sister had witnessed her husband’s accident and cradled him in her arms as he went away.

Emma and Daniel Heritage (pictured) have been hiking in the Canadian Rockies and have kept their Facebook friends and family informed of their trips.

Daniel Heritage, 28 (pictured), was sadly killed in an accident in Calgary, Alberta, only months after embarking on a once-in-a-lifetime vacation with his wife Emma.

Their father has now travelled to Canada to be with his bereaved daughter, who is now living with traveling companions.

Ms. Bartel stated that Daniel was one of the most ambitious persons she had ever met and that, as a twin, she felt particularly close to him.

Ms. Bartel told The Advertiser, ‘He felt like my brother long before they got married’

The quality I admired most about him was his concern for others.

You consistently felt heard by him.

Before departing, the couple had constructed a home in the Adelaide suburb of Valley View. They were also avid nature lovers who planned weekend excursions.

Ms. Bartel stated that her brother-in-law (shown) would go above and above to assist a loved one in achieving their goals.

Ms. Bartel stated that her brother-in-law could do anything and would go above and above to assist a loved one in reaching their goals.

Mr. Heritage is seen ascending a frozen waterfall and viewing the sunset at Sundance Canyon with a herd of wild deer in the final images of their ideal vacation.

The pair, who recently marked their fourth wedding anniversary, had planned to spend two years in Canada but tragedy cut their journey short.

A GoFundMe page is gathering funds to cover burial expenses and send Ms. Heritage’s father to Canada, where he will accompany his daughter on the arduous voyage home.

A GoFundMe campaign is seeking money to cover funeral expenses and send Ms. Heritage’s father to Canada to comfort his bereaved daughter.

Ms. Bartel said on the campaign website, “We would highly appreciate any contribution to help relieve the financial expenditures connected with traveling so suddenly and to assist the families with burial bills and other expenses.”

“We would want to thank everyone for their kind comments, love, and support during this difficult time.

Please continue to pray for Emma and our families as we navigate a grief that will last a lifetime.

Friends flocked to Facebook to express their sorrow over Mr. Heritage’s unexpected death.

Melissa Swinbourne, a friend, stated, “It is difficult to express how much this hurts, how much you will be missed, and how cruel life can be.”

The pair had intended to spend two years hiking, camping, and rock climbing in Canada’s Rockies when their dream vacation was cruelly cut short.

“Daniel was having a dream experience with his great wife, and now we must assist in bringing him home and assisting Emma with whatever the future may hold.”

“I will always miss you, Danny Heritage”

Monique Rice, an additional friend, stated that Mr. Heritage was gone too soon.

She stated, “He was my sister’s best friend, husband, and travel companion.”

“He was tragically stolen from us too soon, and I would be very appreciative and humbled for any support that may be offered.”

»Daniel Heritage, an Australian climber, dies in his wife’s arms in Canada«