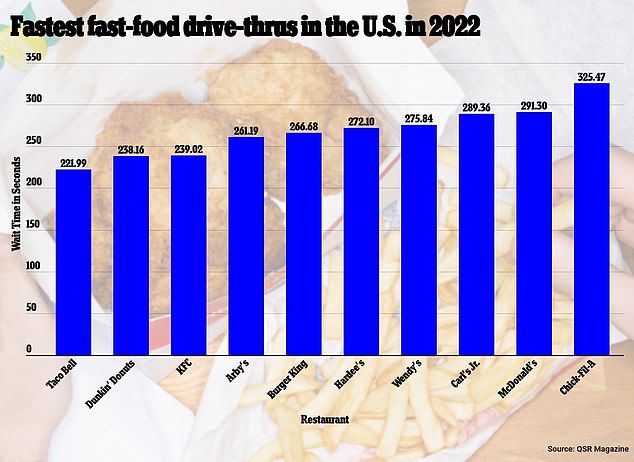 When ordering fast food, speed is crucial. This year, Chick-fil-A has been classified as the industry’s slowest franchise for drive-thru service, as wait times steadily decrease to pre-pandemic levels.

The Georgia-based restaurant came in last with a wait time of around 325 seconds, but the fast food restaurant chain known for its chicken sandwiches is the most well-liked, with 16% of its lineups including 10 or more vehicles (5.45 average).

McDonalds, the second-most popular chain of fast food restaurants, averaged 3.13 automobiles per drive-through lane, although just 2% of its patrons had as many cars in line as at Chick-fil-A.

The research did not take into account popularity (the number of vehicles in line) as a consideration in that area, therefore Taco Bell came out on top with an average service time of roughly 221 seconds, followed by Dunkin’ Donuts (238 seconds), KFC (239 seconds), and Arby’s (261 seconds).

Drive-throughs have also been operating around 10 seconds faster than they did during the epidemic, which may have a significant impact on a customer’s choice to return or not in the future.

According to a QSR and Intouch Insight analysis that included data from more than 1,500 drive-thru “mystery shops” around the nation, the current average still lags below 2019 figures by about 45 seconds.

Additionally, the research found that orders completed with polite workers are 15% more precise and almost three minutes quicker than those with hostile customer service, and that negligence may result in a longer wait time, higher unhappiness, and lower revenue.

According to the survey, “unfriendliness may result in over $180,000 in losses yearly per shop” based on the cost of an ordinary lunch.

One of the first fast food franchises to concentrate on translating the high level of service provided in its restaurants to drive-through lanes was Chick-fil-A at the height of the epidemic.

According to Matt Abercrombie, senior director of service and hospitality at Chick-fil-A, “We feel that staring eye-to-eye with the consumer allows for a connection that begins from the beginning of the drive-through.”

Researchers came to the conclusion that Chick-fil-‘check-point A’s system,’ which keeps consumers connected with employees through ordering, payment, and pick-up, had significantly improved.

With 88 percent of customers rating the fast food chain’s service as “friendly” and just 1.7 percent giving it a “no confidence” rating, customers shared a sense of contentment with it.

Arby’s, with an accuracy score of 89.6%, was rated higher by fast food regulars when it came to customer satisfaction. Second and third place went to McDonald’s and Burger King.

In the poll, Wendy’s lagged behind in a few areas and came in seventh for service speed. With a score of 79.4%, the Ohio-based brand likewise performed poorly in terms of order accuracy.