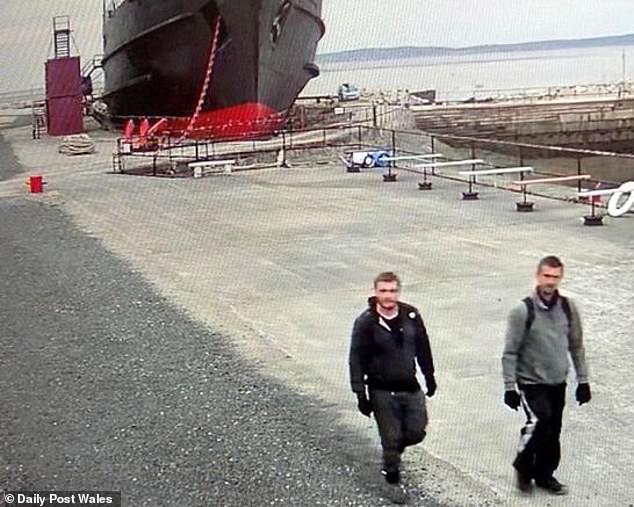 Police have published CCTV photographs to aid in the search for robbers filmed ascending an anchor chain on a decommissioned cruise liner.

During raids on the Duke of Lancaster that occurred in Mostyn, Flintshire, between September 3 and 4, several items were stolen.

Two males were recorded by security cameras approaching the site, while another image shows an unknown man attempting to board the ship by holding to the anchor chain.

The ship’s theft was attributable to ‘anarchy,’ according to the dock’s owner.

A daredevil was captured on camera climbing the anchor chain of a cruise liner, and authorities are now searching for him.

After a succession of disappearances during raids on a decommissioned cruise ship in Mostyn, Flintshire, police have issued a burglary alert and released this image of two people near the ship.

The Duke of Lancaster has become a landmark at the port where it is moored, but urban explorers are increasingly targeting it.

John Rowley, the owner of a dock, stated that intruders using the term ‘urban explorers,’ who typically trespass on abandoned ruins or hidden components of the man-made environment, have scaled razor wired security fencing and an anchor chain to gain access to an upper deck.

He stated, “The so-called urban ‘explorers’ is merely a label they have adopted as a thief’s cover while seeking glory for their activities.”

Currently, anarchy reigns; the ship has been raided two nights in a row.

The ship Duke of Lancaster has not been utilized for commercial purposes for more than four decades and is currently in dry dock.

It operated as a cruise ship between 1956 and 1979, when it was sold to a Liverpool-based firm and towed to Llanerch-y-Mor near Greenfield.

If you recognize the individuals seen in these photographs, please contact us.