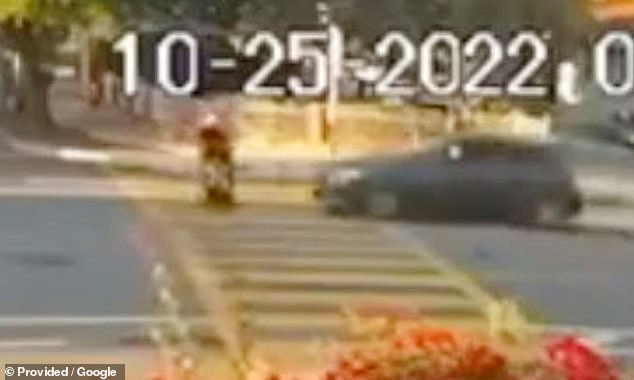 A woman and her grandson were crossing a calm road in San Jose, California, when they were struck by a vehicle that fled the scene.

The 68-year-old woman has three broken ribs and a broken shoulder, according to the mother of the three-year-old boy.

Tuesday about 5:40 p.m., a home security camera captured the moment a dark gray 2012 Mazda 3 struck a grandma pushing her grandson in a stroller.

His mother told KTVU that the youngster is recovering with a scar and a bruise on his head. The police have initiated an inquiry to locate the vehicle and determine its driver.

“I couldn’t believe it,” claimed the mother of the three-year-old. I cannot imagine how anyone could drive that way. This is just terrible.

The crash occurred at the intersection of Sierra road and Mauna Kea Lane. Sierra road is a four-lane road that connects East San Jose Foothills to East Capitol Expressway.

The speeding gray Mazda knocked the 68-year-old woman pushing the stroller to the ground. She was sent to the intensive care unit with shattered ribs and a broken shoulder.

Home security footage recorded the Mazda flying through the intersection without slowing down before or after hitting with pedestrians.

The footage was captured by security cameras outside a residence near the intersection.

The local resident Yong Oin stated, ‘I know her. She travels this route daily to take her grandchildren to the high school track.

Residents along the busy section of Sierra Road believe that a basic crosswalk is insufficient to ensure the safety of pedestrians.

The grandmother is seen crossing the street minutes before she is struck by a Mazda.

Residents near the busy section of Sierra Road believe that a basic crosswalk is insufficient to make crossing the road safe.

San Jose police are requesting assistance in locating the driver. Anyone with information should contact the police department at 408-277-4672.