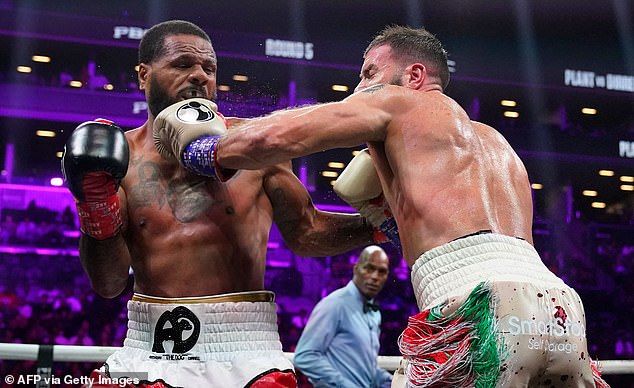 On Saturday at the Barclays Center in Brooklyn, New York, a fierce super middleweight rivalry reached a head.

Caleb Plant and Anthony Dirrell engaged in antagonistic promotion prior to their 168-pound boxing match.

It was anticipated to be a 12-round bout, but Plant finished Dirrell in such a violent and dramatic fashion that it will undoubtedly be considered for Knockout of the Year honors. Plant desperately wanted to comeback from an 11th-round knockout loss to Saul “Canelo” Alvarez.

The harsh conclusion was undoubtedly the result of extensive rehearsal.

Insider spotted Plant’s trainer, Stephen “Breadman” Edwards, urge his boxer to “sit down” on his punches during a media session in Las Vegas last month. That is, when punching, one should place their weight firmly on the balls of their feet to maximum power. Clearly, they were attempting to gain control of the camp.

This past weekend, in the ninth round of his battle with Dirrell, Plant put this advise into reality by attacking the side of his opponent’s body with a left and then shifting fast to a hook punch that dropped Dirrell instantly.

There was no way out of that situation. It was over; Plant had triumphed.

Plant appeared to dig a fake grave for Dirrell to celebrate his victory.

To add insult to injury, Plant seemed to imitate a gravedigger by scooping fictitious dirt over his concussed opponent.

The celebration was likely in response to Dirrell’s fashion outfit earlier in the week, when he donned a white shirt with the words “Plant flowers” atop a cartoon image of the fighter’s severed head in the mud.

When referee Harvey Dock realized what was happening, he raced up to Plant and shoved him away from Dirrell’s body in an apparent effort to convince him to stop.

The knockout and celebration were not the night’s only wild scenes.

However, the crazy behavior did not end there.

“I’m sure you’ve all heard how much [Dirrell] despises me,” Plant stated in his post-fight interview.

Then, he recalled some of the things Dirrell said in the lead-up to his ninth-round knockout.

Plant stated, “He stated that he will never allow a white boy to beat him.” Let me tell you something: skin does not win fights; talents do.

Caleb Plant rejoices with his victory.

Plant also remarked “This victory felt good, and my head and emotions helped me win this war. I was in charge the entire time. My coach instructed me to be patient and ease into the game, so we did just that. Then bang!”

The victory improved Plant’s professional boxing record to 22 victories (13 knockouts) and one loss.

The fighter appears eager to do everything it takes to secure the battle he desires most, a rematch with Alvarez.