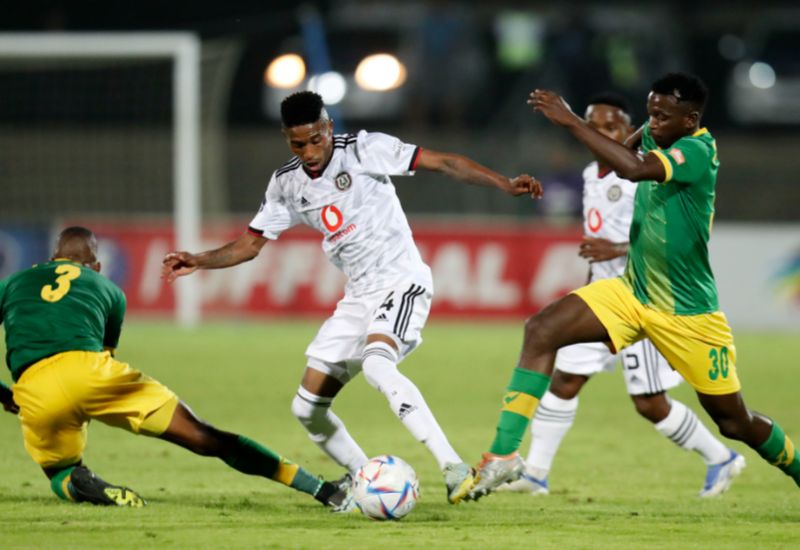 In a matchup in which goals have been sparse in recent years, with only two scored in the last six meetings between the two teams, the Buccaneers were looking for their first victory since September.

Early indications suggested that the net would be rocked multiple times on the evening, with the visitors pressing forward from the opening kickoff before Thabiso Monyane set up Ndabayithethwa Ndlondlo, whose close-range drive sailed over the crossbar.

Monnapule Saleng scored the game’s first goal in the sixth minute after Kermit Erasmus played him in from the edge of the penalty area. Saleng smoothly slotted the ball into the net after receiving a pass from Kermit Erasmus.

After taking the lead, the Soweto Giants kept control of the game and were able to withstand the occasional attack from the home team, which was seeking an equalizer.

Saleng remained a thorn in the side of the opposition and could have returned the favour for Erasmus when he threaded a through-ball into the path of the Bucs striker, who was denied by Arrows goalkeeper Nkosingiphile Gumede.

In the 24th minute, as the Buccaneers maintained their chase of a second goal, the same partnership supplied another decisive moment. Erasmus displayed wonderful control inside the box before finding Saleng, whose low shot slipped under Gumede and into the back of the net.

As they did after scoring the game’s first goal, the Soweto Giants maintained their effort and pressure on the Durbanites.

Saleng might have given them a 3-0 lead in the 29th minute when he attempted to score from just beyond the penalty area, but his shot curled wide of the goal by only inches.

Erasmus and Kabelo Dlamini pulled saves from Gumede, and Deon Hotto came close to adding his name to the scoresheet, but his attempt rolled wide of the goal.

However, it was the hosts who dominated the final exchanges of the first half, obtaining a free kick in front of the Pirates’ goal that was taken by Nqobeko Dlamini, whose effort was easily saved by Siyabonga Mpontshane.

Abafana Bes’thende attempted to continue where they left off in the second half, forcing the Buccaneers to defend early on.

However, they were able to relieve the strain, with Ndabayithethwa Ndlondlo unleashing the first shot of the second period, forcing Gumede to make an outstanding save.

Pirates continued to absorb pressure from Arrows, who attempted to gain an advantage by pressing players forward, while limiting opportunities in their defensive zone.

Collins Makgaka nearly made an immediate impact in the dying seconds of the game, drawing the attention of the opposition’s defense deep inside the home team’s area before releasing Ndlondlo, who could not keep his shot down.

As they did in the first half, the men in green found a spark in stoppage time, forcing Mpontshane to make two rapid stops to keep the home team scoreless.

In the end, Saleng’s brace was enough for the Buccaneers to earn all three points and move up to fourth place in the league standings.