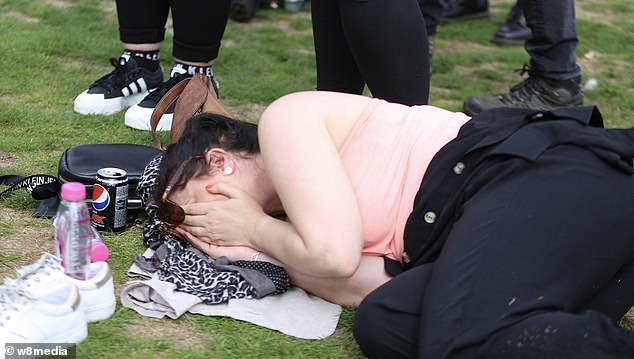 On Monday night, after her sombre state funeral in central London, Britons around the nation raised a toast to the late monarch.

Her Majesty, who passed away two weeks ago at the age of 96, was interred beside Prince Philip at St. George’s Chapel after a moving ceremony at Westminster Abbey.

Up to two million people lined the streets from Buckingham Palace to Windsor Castle on the historic day of pomp and circumstance, while an estimated four billion people watched the event on television.

However, after a day of public mourning, royal enthusiasts urged their fellow Britons to conduct their own unofficial wakes.

‘Just realised we should have planned a massive wake,’ one Twitter user wrote, ‘Essentially, everyone find your local pub, buy a pint and raise a toast to the late Queen Elizabeth II.’

He added: ‘What a day for Britain. I’m emotionally exhausted by eternally proud.’

Drinkers in the Sherlock Holmes pub in St James’s, central London, after the Queen’s funeral

Revellers drink a toast to Her Majesty at Halfway to Heaven in Charing Cross, central London

People watch live the funeral service of Queen Elizabeth II, at a pub in London on Monday

Another said: ‘Only right we all go down the pub for the wake and toast a few tequila shots to the Queen.’

One joked: ‘Off to the pub, it’s what she would have wanted’, while another agreed, adding: ‘Have been at the pub for the last two hours.’

Others suggested the pallbearers get down to their locals.

One wrote: ‘Those ten lads carrying the Queen’s coffin now need a few pints… what an act of service!’

Revellers were pictured filling up pubs in Wales and central London today following the historic state funeral – the first since Winston Churchill’s in 1965.

The Queen was finally laid to rest to be with her beloved Prince Philip after her crown, orb and sceptre were removed from her coffin so she could descend into her grave ‘as a simple Christian soul’.

‘Fizz for Liz’: Brits head to the pub to raise a glass for the late Queen, whose state funeral took place on Monday

The Royal Family stood at the end of the short committal service as the Queen was slowly lowered while the Dean of Windsor said: ‘Go forth upon thy journey from this world, O Christian soul.’

In addition, he presented the commendation, which is a prayer in which the departed is committed to God’s compassion.

Charles was genuinely saddened as the Queen’s oak casket was lowered into the vault on a day when he appeared tearful many times as he said farewell to his “Mama,” the 12th British monarch to be buried at Windsor.

Her Majesty’s lengthy journey to her ultimate resting place – and to be reunited with the Duke of Edinburgh – started in Balmoral on the day of her death eleven days ago and culminated with her private burial next to her ‘strength and stay’ Philip this evening at 7.30pm during a private family service.