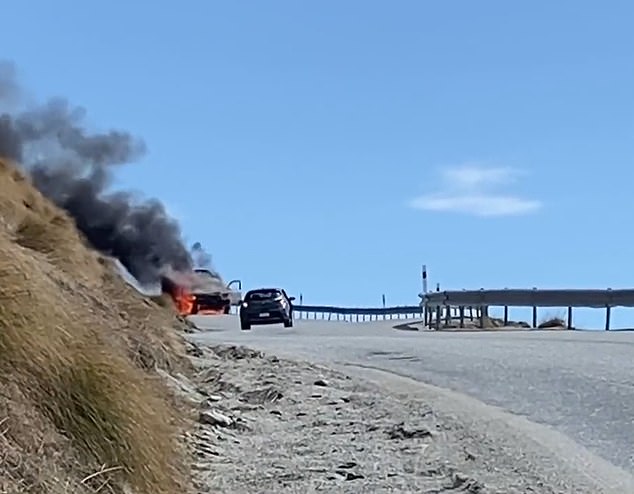 At a well-known tourist destination, a 4WD caught fire and an Australian family managed to escape before it rolled down the road in a huge blaze, horrifying bystanders.

On Wednesday, the five-person family’s car broke down as they were mounting a mountainous road in Queenstown, New Zealand, on their way to the Remarkables ski areas.

Before the automobile, which had a full tank of fuel, caught fire and sent a massive plume of black smoke billowing into the air, the party hurriedly exited.

Ross Lawrence, manager of the Remarkables Ski Area, said that the driver had not observed any problems with the car prior to it breaking down on a hilly road bend.

Mr. Lawrence reported to stuff.co.nz that “the automobile slowed, or stalled, and stopped.”

He said the driver let the vehicle, which had just had a fuel fill-up, roll back 20 meters to a safe spot.

The driver then saw smoke emanating from the engine.

He leapt out and noticed flames as he peered inside the grill, according to Mr. Lawrence.

“He commanded them everyone to go, and they left promptly.”

It is believed that when the automobile transformed into a firestorm, the brake wires were damaged by the flames.

The blazing automobile can be seen sliding down the slope toward oncoming drivers in social media footage of the fire that was captured by another driver.

The vehicle is seen leaving a smoke trail in its aftermath as it crashes into a hillside and climbs a grassy verge.

Onlookers can be seen frightened in the footage as the 4WD careens down the road.

Prior to the truck crossing the road and coming to a halt at a guard rail, additional grass on the slope caught fire.

Two helicopters, fire vehicles, and emergency personnel from Queenstown and Frankton were employed to put out the fire.

The family may have previously resided in Queenstown and had borrowed a friend’s vehicle to go to the ski resorts.