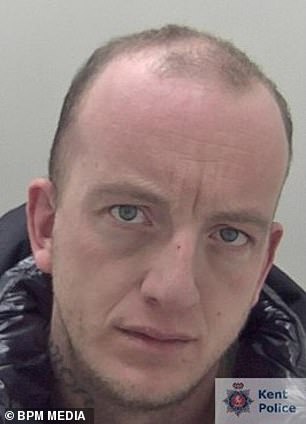 Three years and two months in prison for setting fire to his ex-garden girlfriend’s shed when she was at home with her kids.

On the evening of Saturday, April 16, Tyrone Ludlow, 35, was seen on doorbell camera video carrying a gas can as he approached his victim’s house in Gravesend, northwest Kent.

His ex-girlfriend heard a huge explosion that caused the building to reportedly shake while she was at home with her three kids.

Later, she saw flames emerging from her garden shed, which Kent Fire and Rescue Service responded to put out.

Later that evening, Ludlow was taken into custody and charged in connection with the crime.

A fight that erupted at her house on January 19 had led to the end of his relationship with her.

Kent Police said that Ludlow hurled a cell phone at her, just missing her head and damaging a wall.

Then, while yelling insults in her face, he broke a television and wrenched a kitchen cabinet door off its hinges.

Following the event, the victim obtained a non-molestation order against Ludlow, which he violated twice in April by sending her texts.

After entering a guilty plea to arson, Ludlow, of Greenhithe, received his punishment yesterday at Woolwich Crown Court.

In respect to the same victim, he also pleaded guilt to counts of assault, criminal mischief, and violation of a non-molestation order.

Tyrone Ludlow is a violent person who showed no regard for the safety of his victim, her three children, or anybody else who lived nearby when he carelessly set off an explosion at her house, according to the investigating officer, detective constable Brian Mitchell.

“Offenders like him who lack self-control and endanger others cannot protest when they are imprisoned and stripped of their freedom.”

“I hope Ludlow’s victim will find some solace in the knowledge that he is now in jail where he can hurt no more to her or any other woman,” the author writes.