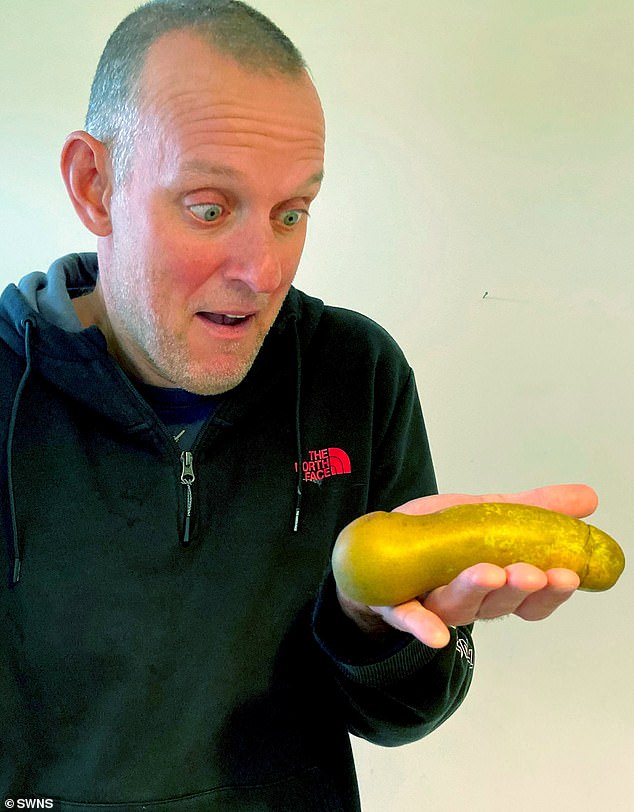 One Aldi customer was taken aback when he saw a pear with a particularly unpleasant appearance in his weekly shop.

Johnny O’Connell, 43, broke out laughing when he spotted the seven-inch fruit that resembles male genitalia in a remarkable manner.

The father of two from Morpeth, Northumberland, claimed his wife encouraged him to lose weight, so he purchased a bag of Conference pears for £1.49 to snack on on Wednesday.

He said: ‘I’d nipped to buy a few things and brought them home and was unpacking them when I fancied a snack.

‘My wife’s been on at me about losing a few pounds so I ripped the bag of pears open and out tumbled this willy shaped pear.

‘My eyes almost popped out my head. My missus just started laughing.

‘I told her there’s no way I’m eating that.

‘As a laugh I posted pictures of it on my social media and my mates thought it was hilarious.

‘I’ve had loads of comments, including some very rude ones, but I like to think I’ve given people something to smile about.

‘I certainly won’t be looking at pears in the same way again.’

It comes as farmers saw their crops devastated by the extreme heatwaves that tore through Britain back in August.

The National Farmers Union (NFU) has launched a campaign to get shops to accept more “wonky” vegetables, which, according to them, “may not look normal, but will taste the same.”

Tom Bradshaw, vice-president of the NFU told The Telegraph: ‘There isn’t anything which is not impacted if it’s grown in a field that isn’t irrigated.’

‘And that’s still the case of everyone just needing to pull together a little bit to accept that it’s not been a perfect time.’

The labourer is now keen to find other ‘naughty’ fruit and veg while shopping.

He added: ‘It’s certaintly brightened up going on the weekly shop.

‘As well doing the old squeeze test, I’ll be checking if it looks rude and if so, then it’s going in the basket.

‘I used to be a big fan of That’s Life in the 80s when they’d show rude vegetables and I’d like to find as many naughty fruit and veg as I can.’