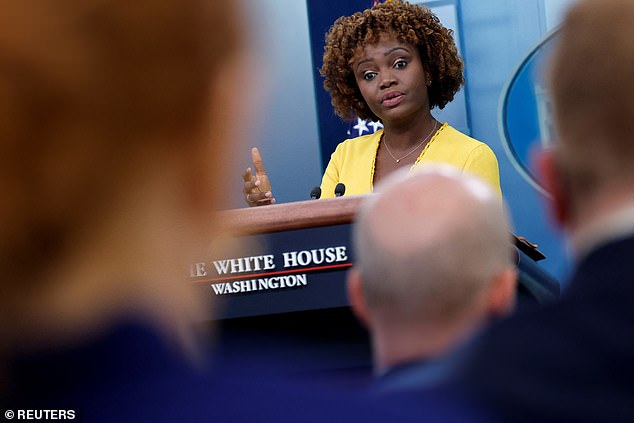 A few hours after President Joe Biden celebrated the Atlanta Braves’ 2021 World Series victory with the team, the White House press secretary said on Monday that it was crucial to have a dialogue regarding the club’s name.

Fans of the Braves, on the other hand, still do the “Tomahawk Chop” celebration.

When queried about the name at her daily briefing, Karine Jean-Pierre said, “We feel that it’s vital to have this discourse.”

And the voices of Native Americans and other indigenous peoples need to be at the forefront of this discussion. The president has frequently emphasized that all individuals ought to be treated with decency and respect, and this administration shares his belief in that.

Biden greeted the World Series champion players to the White House earlier in the day when the Braves squad was present in the East Room.

He characterized their surprising championship run after being written off early in the season as a “unstoppable, wonderful” journey.

He was given a Braves jersey, but he made no mention of any dispute around their name.

“Not everyone is the same. Before the World Series, he observed, “The Braves have done a tremendous job with the Native American community.”

‘The chop and the Braves’ program have the full backing of the Native American population in that area.

For me, it very well puts the matter to rest.

It ensured that the controversy did not detract from the Braves’ White House visit, when Biden spoke about the highs and lows of their unexpected season.

Early in the season, the Braves were written off and finished with a losing record through the All-Star break.

The Houston Astros were defeated in the World Series, although they rallied to go to the playoffs.

You qualified for the postseason and defeated the Braves, Brewers, and Dodgers. As he recalled their season, Biden referred to them as the “upset kings of October” after defeating the Astros to win it all.

“One of the biggest turns around in history.” 1st championship in 26 years.

But none of it was simple.

They counted you out, they said. Heck, I’ve experienced being excluded before.

And I am aware that in Georgia you turn up when it matters.

The fact that Biden defeated Trump in the state was a crucial factor in his electoral success. Despite a determined effort by the then-president and his friends to have the outcome overturned, the state recognized his victory.

Biden received a jersey from the Braves with his name and the number 46 embroidered on the back.

In exchange, he praised their “unstoppable, wonderful” run.

‘It was a difficult beginning; I played through ailments. There was not a single day with a winning record at the all-star break.

Given a 0.4 percent likelihood of success on CNN. To laughs, he said, “My batting average isn’t quite as excellent.”

Keisha Lance Bottom, a former mayor of Atlanta and current head of the White House Office of Public Engagement in the Biden administration, was one of the attendees.

She was joined at the occasion in the East Room of the White House by her successor, Mayor Andre Dickens, and Lisa Cupid, commissioner of Cobb Country, which is home to the Braves’ field.

The politicians, athletes, and business leaders’ attendance signaled that there were no unresolved issues after Biden last year supported efforts to relocate the All-Star game from Atlanta’s Truist Park.

Democrats pushed for the modification after the state implemented election regulations that some said would violate voters’ rights.

The new legislation, according to Biden, “is Jim Crow on steroids.”

But under President Donald Trump, they turned into highly contentious events, and athletes, or whole teams, chose to stay out.

The Philadelphia Eagles and the North Carolina Tar Heels were among the teams who received invitations to Trump’s White House, but they turned them down.

Not even other teams were invited.

Under Biden, the custom of team visits has been revived.