Skip to content
Home » News » News » A suspect in the death of Varun Manish Chheda, 20, on school property has been named as Purdue University student Gji Min Sha, 22 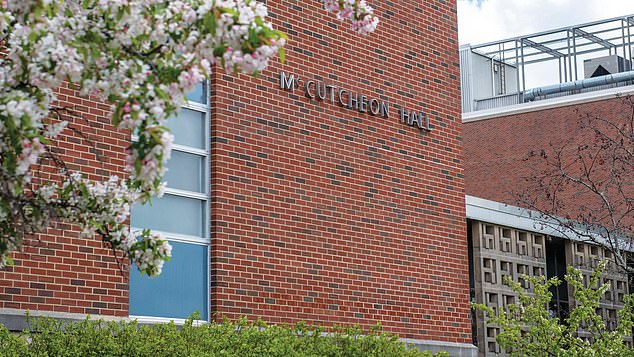 Gji Min Sha, 22, is charged with preliminary murder in the death of roommate Varun Manish Chheda, 20, who was discovered dead inside their McCutcheon Hall dorm room shortly after midnight on Wednesday.

A’scream or some loud noises’ woke up residents at the hall in the middle of the night, they claim.

Lesley Wiete, Chief of the Purdue University Police Department, says the murder was ‘unprovoked and senseless.’

Sha was recognized as a junior studying cybersecurity and an overseas student from South Korea at the school.

An autopsy on Chheda has yet to be completed, and Wiete says police have not determined the cause of death or whether a weapon was used.

Sha has not yet been booked into the Tippecanoe County Jail, though Capt. Song Kang anticipates that this will happen later Wednesday.

Sha called campus police at 12:44 a.m., according to Tim Doty, Purdue’s director of media and public relations, who spoke to the Indianapolis Star.

Sha, also known as ‘Jimmy,’ was apprehended minutes after police arrived at the first-floor house. Wiete stated that once Sha was captured, there was no threat to campus.

In a statement, Dennis Bisgaard, Interim Head of Park Tudor School, said, “The entire Park Tudor community is terribly heartbroken by the untimely loss of Varun Chheda, Park Tudor class of 2020.” ‘Our thoughts and prayers are with his family during this terrible time.’

According to a Facebook post, Chheda was a National Merit Scholarship Program semifinalist in 2020. Wiete described him as a senior in data science at Purdue.

According to authorities, other inhabitants on the first floor of McCutcheon Hall have been relocated.

The most recent killing on campus occurred in January 2014, when Cody Cousins, a computer engineering teaching assistant, was sentenced for the murder of Andrew Boldt, an electrical engineering student.

Boldt was shot and stabbed by cousins, who were then 24 years old, after they entered the school’s Electrical Engineering Building brandishing a gun and a knife. Cousins admitted to police that he had no reason for the act. ‘Our hearts go out to the victim, his family, friends, and everybody who knew him or was impacted by him in his life,’ Wiete added.

‘Today is really sad and awful for us, and I can’t image what his family is going through.’

In an email to students, university president Mitchell Daniels stated that student safety is a top priority for school officials.

‘This is as devastating an event on our campus as we can imagine, and our hearts and thoughts go out to all of those affected by this dreadful event,’ he wrote.

»A suspect in the death of Varun Manish Chheda, 20, on school property has been named as Purdue University student Gji Min Sha, 22«