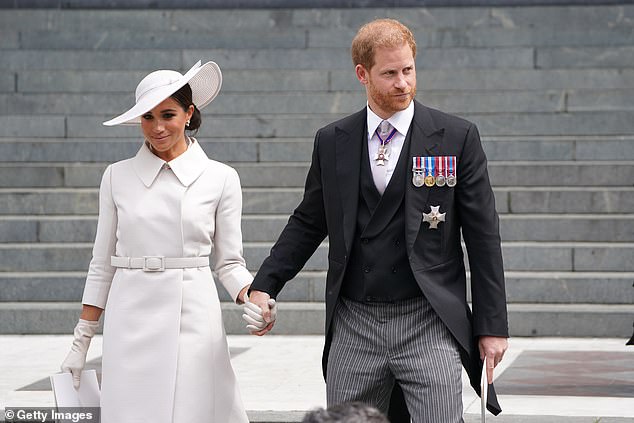 Prince Harry resigned from his position as a member of the royal family with his bride, Meghan Markle, according to a royal biographer, and he seemed as wretched as Edward VIII.

Hugo Vickers, who has written books on the Duke of Kent and Queen Elizabeth the Queen Mother, asserts that after severing links with the Royal Family, both Harry and Edward VIII “seemed to emanate grief.”

In an apparent effort to escape the demands of being working royals and media attention, the Duke and Duchess of Sussex retired from their royal obligations in 2020.

Similar to the Duke of Windsor, the former King of England abdicated the throne in 1936 to wed American divorcee Wallis Simpson, a relationship that the UK government strongly disapproved of.

Edward VIII may not have expressed sorrow for stepping down, but according to Mr. Vickers, he had “never seen somebody with such sad eyes” as the former king.

In a speech at the Henley Literary Festival, Mr. Vickers remarked, “I suppose the reason the Queen always had such dazzling eyes was because she committed herself to duty,” according to The Times.

He said that by marrying Ms. Simpson, Edward VIII “followed the route of imagined bliss,” but that “in the end, duty makes you happy.”

He wouldn’t have claimed he regretted anything if you had woken him up at four in the morning and asked. However, the author said, “If you want to know what he actually thought, look at his eyes.”

Prince Harry has reportedly seemed dissatisfied since giving up his life as a working royal, according to Mr. Vickers.

Who knows what’s going to happen to the Duke of Sussex? He said, “I believe he looks utterly wretched.

The biographer also discussed the idea of a slimmed-down monarchy put forward by the incoming King Charles III, claiming it would be dangerous for the royal family.

People do want to see monarchies, so I don’t see how you can have a slimmed-down version of them, he said.

The Queen and Prince Philip both headed up over 2,000 organizations. Prince Andrew and Prince Harry are no longer yours. Who will carry it out?

Only a few days had passed since the first official photograph of King Charles III and his Queen Consort, Camilla, had been made public by Buckingham Palace.

The newly named Princess of Wales, his wife, and the Prince of Wales, his oldest son and heir, who is noticeably taller than Charles, are standing by their side.

The image, which features the new sovereign with his son and heir and King George III, the longest-reigning male king in British history, towering in the background, is obviously rife with meaning.

The fact that the photo was shot on the day of the Queen’s burial, when our four most senior royals were preparing to throw a huge celebration for visiting Heads of State, may be even more surprising.

The absence of Harry, the younger son of the King, is the proverbial “elephant in the room.”

The Duke and Duchess of Sussex would have expected to be a member of the family group three years ago.