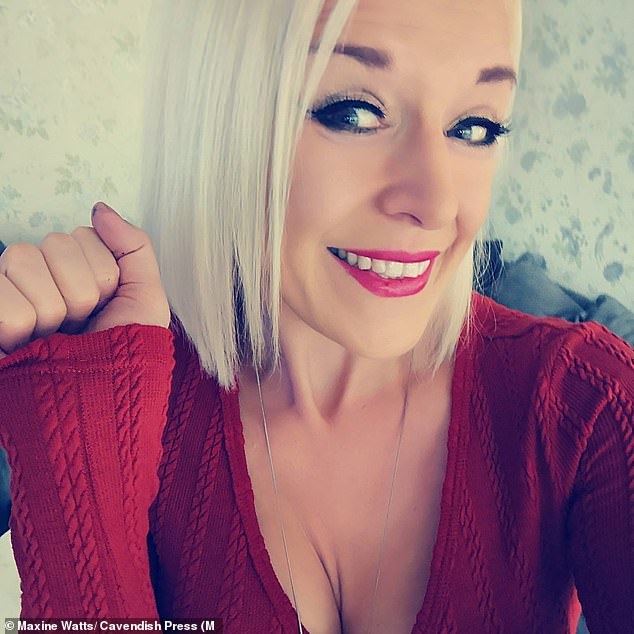 An unemployed mother-of-three has been banned from driving for over a year after she was caught drunk at the wheel of her car with her children inside.

Single mother Maxine Watts, 40, failed a breath test after she accidentally crashed her vehicle into another car while taking her children on a shopping trip last month.

Witnesses said they could smell ‘intoxicating liquor’ on her breath and that she appeared to be slurring her words.

Watts, of Cheshire, had drank wine earlier in the day after having completed an interview with a local newspaper where she detailed her struggle to afford full-time childcare.

She admitted failing to provide a specimen of breath at Chester Magistrates Court and was banned from driving for 16 months.

Watts was also fined £120 and made to pay £168 in costs and victim surcharge.

Watts drank two 120ml glasses of wine on September 23 after having completed an interview with Wirral Globe in which she discussed the impacts of the cost-of-living crisis.

She was headed to the shops with her children around 6.15pm when she ‘reversed’ into another driver’s passenger door.

‘Witnesses were both in their car on Gleneagles Road, Little Sutton, when the defendant reversed into their car’s passenger door,’ Prosecutor Georgia Leyland told the court. ‘The defendant stopped nearby and exchanged details with the driver.

‘However, the witnesses said they could smell intoxicating liquor on her breath. There were children in the car and she appeared to be slurring her words.

‘The witnesses phoned the police as the defendant drove away.’

Officers arrived at Watts’ home and administered a roadside breath which ‘proved positive.’ She was taken to the police station and tried nine times to give a breath sample but failed due to ‘difficulties.’

Ms Leyland explained: ‘Officers attended the defendant’s address where a roadside breath test proved positive. She was taken to custody where she was given nine attempts to provide a sample of breath but she failed to provide a sample.

‘She failed to blow into the machine correctly.’

‘It is believed she had difficulty with the procedure but it was still assessed as being a deliberate failure to provide a sample of breath. She does suffer from asthma and was trying to provide a sample but failed to do so. She had nine attempts to complete it.’

Watts had no previous convictions on her record and her lawyer Steve Coupe said he did not consider the offence a ‘deliberate refusal.’

‘You have heard that this lady is of good character,’ Mr Coupe argued.

‘It is right to say that she’s ashamed to be in court this afternoon. It was a Friday and she had spent a large part of the day preparing and participating in a newspaper article for a local newspaper which highlighted the lack of affordable child care for mothers wanting to go into work.

‘She accepts that she drank two 120 ml glasses of wine and thereafter went out to get some food for her children.

‘She thought she would be fine to drive and accepted that there was a relatively modest collision while she was reversing.

‘She became concerned with the demeanour of the other individuals but did exchange details with them and drove home.

‘The aggravating feature is that she was involved in a road traffic collision and there were children in the car.

‘But in the police station she did try to provide a specimen of breath. I have a letter from her GP to show she does have asthma.

‘She did provide one sample that was acceptable. She did not say ‘no’ to providing a sample, which in my submission was not a deliberate refusal.

Mr Coupe added: ‘If I am able to pick up a heavy weight on one occasion, it does not mean that I should be able to pick it up on another time.

‘There was nothing to suggest there was a high level of impairment in her driving.

Watts was banned from driving for 16 months, but has the option to complete a drink-driving awareness course which would lead to a ‘substantial reduction’ in her disqualification period.

‘Considering you were involved in an accident and three young children were in the car at the time, the ban will be 16 months,’ chair of the bench Andrew Merrill told Watts during sentencing.

‘But we do offer you the drink-drive awareness course which, if completed, will lead to a substantial reduction to your disqualification period.’

Watts, who used to work as a local authority manager, was featured in Wirral Globe five days after her arrest.

She had been interviewed by the local newspaper to claim she was unable to return to work due to the £2,355 a month cost she was quoted for putting her daughters, aged four and two, and one-year-old son into a local nursery.

The article saw Watts declaring: ‘I want to start being able to provide for my family.’

According the newspaper report, parents who work are eligible for up to £646.35 for one child and a maximum of £1108.04 for two or more children under a Government scheme for covering childcare costs.

It said Watts would be expected to pay £1247.18 a month for childcare with government help yet under the national living wage at £10.90 an hour, a typical mother would receive £1744.00 a month working a 40-hour week without tax deductions.

She told the paper: ‘Unfortunately, the government don’t financially recognise any children after the second born.

‘They are creating financial barriers for me to go back to work. I truly believe women are priced out, not only of being able to provide for their families, but also out of their careers. There is a whole workforce of women ready to work and contribute to society, but they are unable to due to not being able to afford childcare.’

Watts had previously given other interviews to the same newspaper in which she shared her tips for saving on energy bills during the cost-of-living crisis.