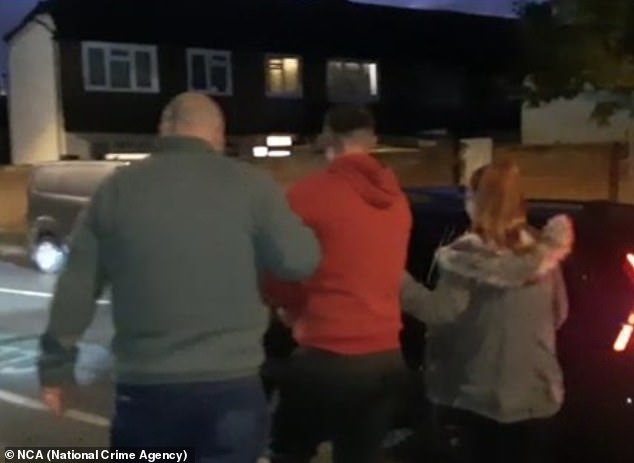 Officers from the NCA are now questioning the individual on the grounds that they believe he is a member of an organized criminal group that is transporting migrants over the Channel.

“Attempts to enter the UK via small boat are very risky, and we know a substantial number are supported by organized crime networks of different complexity,” said NCA Regional Head of Investigation Jacque Beer.

“These networks strive to exploit the people they carry, not to provide their safety or security.” Because of the threat they represent, the NCA continues to prioritize dealing with them.

“Our research is ongoing, but we suspect today’s action will have interfered with the functioning of one such network.”

More than 60 investigations involving networks or people allegedly engaged in organized immigration crime or human trafficking are now under way, only at the NCA.

The organization collaborates with law enforcement in France, Belgium, Greece, Italy, Turkey, and other countries since a large portion of this illegal activity occurs abroad.

While Albanians also make up a significant portion of the migrants traveling over the Channel, it is believed that Albanian traffickers play a significant role in enabling illegal migration.

A record 33,000 migrants have already attempted the treacherous trek over the English Channel illegally this year, prompting Britain and France to promise to halt all such crossings.

The two nations said they would host the “La Collaboration” conference in 2023 in an effort to “strengthen cooperation on energy security” and “address illegal migration.”

After initially declining to say whether Mr. Macron was a “friend or adversary,” which sparked criticism, Ms. Truss recognized Mr. Macron as a “friend” of Britain during the conference.

The two nations’ presidents “decided to enhance cooperation on illegal migration within the confines of international law, to confront criminal gangs trafficking people throughout Europe, culminating in deadly voyages over the Channel,” according to a joint statement from the two nations.

In addition, it said that President Macron and Prime Minister Truss had “decided to strengthen collaboration with close neighbors, especially via an early meeting of the Calais group.” The letter urged “Interior Ministers” to “conclude an ambitious package of actions this fall.”