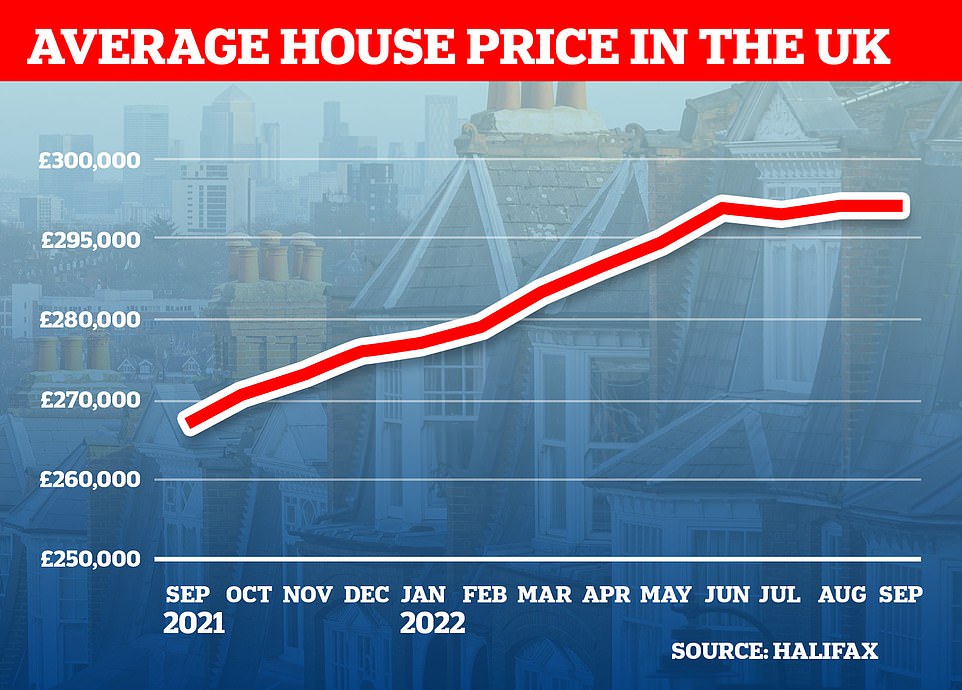 An indicator issued today indicates that the median home price inched down in September from a record high the month before and also raises the possibility that the real estate market has already entered a phase of slower expansion.

Additionally, this indicates that for the first time since January, the annual rate of growth is once again in the single digits. According to Halifax’s index, the average property in the UK currently costs £293,835. August saw a record amount of £294,260.

Halifax said that data dating back to the summer suggest the housing market may already have started a longer-lasting phase of sluggish expansion. The modest decline in September was the second decline over the previous three months.

Following the latest mini-budget last month, the number of mortgage products became much less plentiful. As product variety has slowly increased, lenders have been raising the prices of their mortgage packages.

It is a result of the repercussions from the September 23 statement by Chancellor Kwasi Kwarteng, who announced a number of tax cuts, some of which have subsequently been rescinded. This news caused further uncertainty in the UK economy.

“The events of the previous few weeks have increased economic anxiety, but in fact, home prices have been fairly stable since June, up by around £250,” said Kim Kinnaird, director of Halifax Mortgages.

This is in contrast to an increase of more than £10,000 during the prior quarter, which suggests the property market may have already begun a longer period of slower expansion.

Making understanding of the multiple factors now in play is necessary for making predictions about the future, and the housing market has recently routinely defied predictions.

The prospect of interest rates continuing to rise sharply in the face of the cost-of-living squeeze, as well as the impact in recent weeks of higher mortgage borrowing costs on affordability, are likely to exert more significant downward pressure on house prices in the months ahead. “Stamp duty reductions, the limited supply of homes for sale, and a strong labor market all support house prices.

Although the exceptional amount of housing price inflation we’ve experienced in recent years has been way beyond the historic norm, this will definitely be a source of some anxiety for homeowners.

“It’s vital to look at slower growth in this perspective,” says the author, “since typical property values have increased by around 23% (almost £55,000) since the start of the epidemic, while detached home prices have increased by more over £100,000 during the same time.

In contrast, yearly home price inflation in Scotland, London, Eastern England, and the North East of England has fallen to single-digit levels.

With a 13.3% yearly increase in home prices, the West Midlands has surpassed the South West as England’s region with the highest rate of annual rise.

“In the following months, the effect of increasing mortgage rates will start to damage demand and spending power, which we anticipate will lead to a decline of 10% in UK prices over the next two years.”

“While the upheaval of the previous couple of weeks will go down in the history books, the money markets appear to have steadied a bit,” said Mark Harris, chief executive of mortgage broker SPF Private Clients.

“It is crucial to stress that the mortgage market is still active.”

While mortgage rate increases have increased since the mini-budget, the scenario is not entirely unexpected, according to Bestinvest analyst Alice Haine.

Since December, when the Bank of England began gradually raising its base rate from a record-low of 0.1% in an effort to rein in spiraling inflation, mortgage rates have been rising steadily.

It is anticipated that the base rate, which is now 2.25 percent, will increase to 1 percent at the Monetary Policy Committee meeting next month, driving up mortgage rates once again.

Chestertons’ head of sales, Matthew Thompson, said that the company is “running across an increasing number of homebuyers who want to secure a property as quickly as possible and take up a fixed-rate mortgage.”

This has helped to keep the September real estate market competitive and bustling, he said. Some purchasers are sacrificing on their goals in order to get a house within their original budget as the cost-of-living crisis approaches.

The average five-year fixed-rate mortgage on the market has reportedly crossed 6% for the first time in 12 years, it was revealed yesterday.

According to Moneyfacts.co.uk, two-year and five-year fixed rates now stand at an average of more than 6% for all deposit amounts.

According to Moneyfacts, the average five-year fixed-rate mortgage was 6.02 percent yesterday, up from 5.97 percent on Wednesday.

Mortgages with an average five-year fixed rate last reached 6% in February 2010, when the rate was 6%.

After crossing the six percent threshold on Wednesday, the average two-year fixed-rate mortgage now sits at 6.11 percent, the highest level since November 2008.

Moneyfacts estimated the possible effects of increasing rates for a person with a £200,000 mortgage who would be paying it off over a 25-year period.

The typical market rate for a two-year fixed mortgage in December 2021 was 2.34 percent.

However, based on current average interest rates, their monthly mortgage payments could be £1,302.08; this is a monthly difference of around £420, or more than £5,000 annually.

In December 2021, the average interest rate for a borrower in the same situation taking out a five-year fixed-rate mortgage was 2.64 percent.

But today, if someone took out a five-year agreement, they might normally anticipate paying £1,291.05 per month – an increase of little under £380 per month, or more than £4,500 per year.

Lenders price their mortgages using swap rates, which have lately been rising.

The variety of mortgage options has been progressively expanding as lenders roll out new offerings after drastically decreasing last week, according to Moneyfacts data.

Yesterday, there were around 2,430 mortgage options available, up from 2,258 on Sunday at the beginning of the week. When compared to the 3,961 options accessible on the day of the mini-budget, the mortgage selection is still much less.