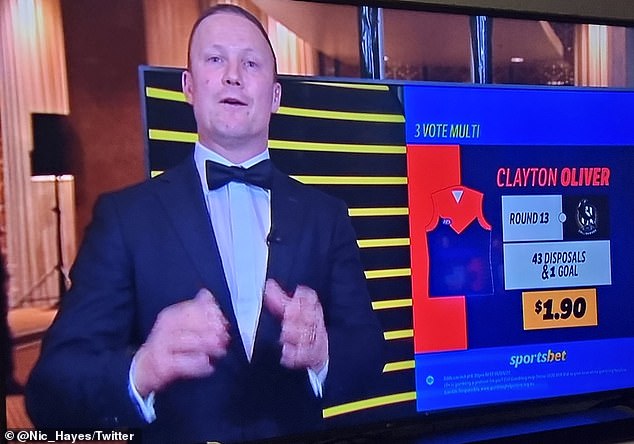 Numerous football enthusiasts have criticized the broadcasting of the 2022 AFL Brownlow Medal as “disgraceful” and “inappropriate for children” owing to the disproportionate amount of gambling games that were featured throughout the program.

Live coverage of the Brownlow medal count, which took place on Sunday at Melbourne’s Crown Casino, was available yesterday night on Channel 7.

Patrick Cripps of Carlton won the prized award with 29 votes, narrowly defeating Lachie Neale of the Brisbane Lions, who won it the previous year, by one vote.

However, several Australians claim that the overabundance of Sportsbet betting advertisements throughout the broadcast tainted the announcement of the results.

Different betting odds for players for each round were featured in commercials and segments from the betting firm that aired on Channel Seven.

Social media was used by viewers to express their annoyance with the continual advertising and gaming incentives as kids watched.

Do you believe we could do one event similar to the #Brownlow without using gaming funds, @AFL? one Twitter user wrote.

“Just one night, you slam us with this dreck every week throughout the season.” You are preventing children from watching.

The appalling hypocrisy of the @AFL, which allows #gambling advertising on #Brownlow while every youngster in the nation is watching, was expressed by another person in their remark.

It normalizes gambling, which is detrimental to many individuals and a losing proposition for the majority of people (sic).

A third person chimed in, “Disgusting by the @AFL to have gambling ads dominating every element of the game.”

The Brownlows disrupted the game all night long with betting odds and additions, even during the Auskick. It is time to eliminate gambling from sports.

A football fan tweeted, “100% gambling wrecks life.” It is really troubling that gambling is constantly promoted during AFL games and other events.

I overhear kids discussing gambling at my place of employment. That is really alarming. This has to end. Trust me, gambling wrecks lives.

Even politicians and members of the media expressed worry over the prevalence of gambling advertisements during the medal count.

Using an image of a Sportsbet gambling transition, independent MP Zoe Daniel wrote: “The linkage with sports events and temptation to wager must cease.” This is making gambling acceptable to our children. Would we like this?

Mr Demetriou was on the boards of Crownbet and Crown Resorts, the company’s largest shareholders.

The AFL’s primary gambling sponsor is now Crownbet. After changing its name to BetEasy in 2018, Sportsbet acquired it the following year.

Sportsbet had an average of 1 million gamblers per month in 2021 and claimed 50% of the Australian sports betting industry.

One of the largest betting firms in the world, Flutter Entertainment, is located in Ireland and owns Sportsbet.

»2022 AFL Brownlow Medal show aired too many gambling games, according to fans«