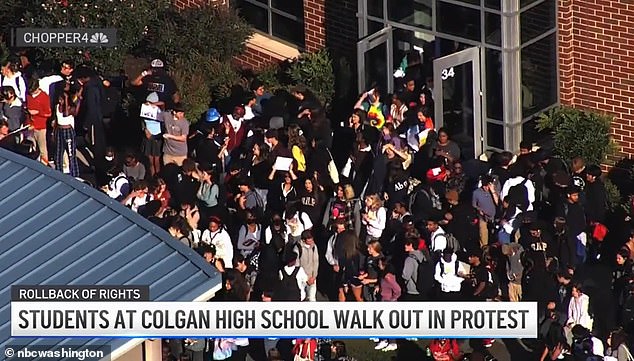 In protest of the state’s decision to overturn a rule that protected kids’ rights to choose their gender identity and preferred names at school, students at dozens of middle and high schools in Virginia held walkouts on Tuesday.

When the new legislation goes into force, parents of pupils will be the only ones who may make that choice.

The new policy, announced by the state’s Republican governor Glenn Youngkin on September 16, also mandates that children use the restrooms at their schools and use pronouns and names consistent with their official school records.

Other students waved the multicolored Progress flag, which has black and brown stripes to represent oppressed black and brown populations and persons with AIDS and light blue, light pink, and white stripes to celebrate transgender individuals.

Additionally, the rules states that kids may only participate in sports teams that correspond to their gender at birth.

Schools will not be allowed to support instructors in telling parents about a student’s gender identification.

The policy states that “every effort should be taken to guarantee that a transgender student who wishes to alter his or her means of address is handled with respect, compassion, and dignity,” while being vilified by left-wing politicians and LGBTQ+ organizations.

A 30-day public feedback process is held prior to the new policy’s formal implementation. More than 16,000 people have already responded since that window started on Monday.

After the public comment period has ended, the Virginia Department of Education will make the ultimate decision about the policy.

The amended policy, which nullifies model regulations put in place by the Democratic Northam administration last year, according to a Youngkin representative, “delivers on the governor’s commitment to safeguarding parental rights and promoting the dignity and respect of all public school pupils.”

Youngkin earlier stressed that each school district would need to comply with them if the measure is approved by the Virginia DOE.

According to Youngkin, who spoke about the bill in an interview with a Washington ABC station, “Parents should be definitely at the center of this dialogue with their children, who they have known since before they were born.”

And I believe that doing this is in the child’s and the family’s best interests. And after reading the policy, I believe people will have a greater understanding of it.

The current Virginia education administration presented several legal and constitutional concepts that are supposed to guide how schools teach pupils, claiming that the Northam model of transgender regulations “disregarded the rights of parents.”