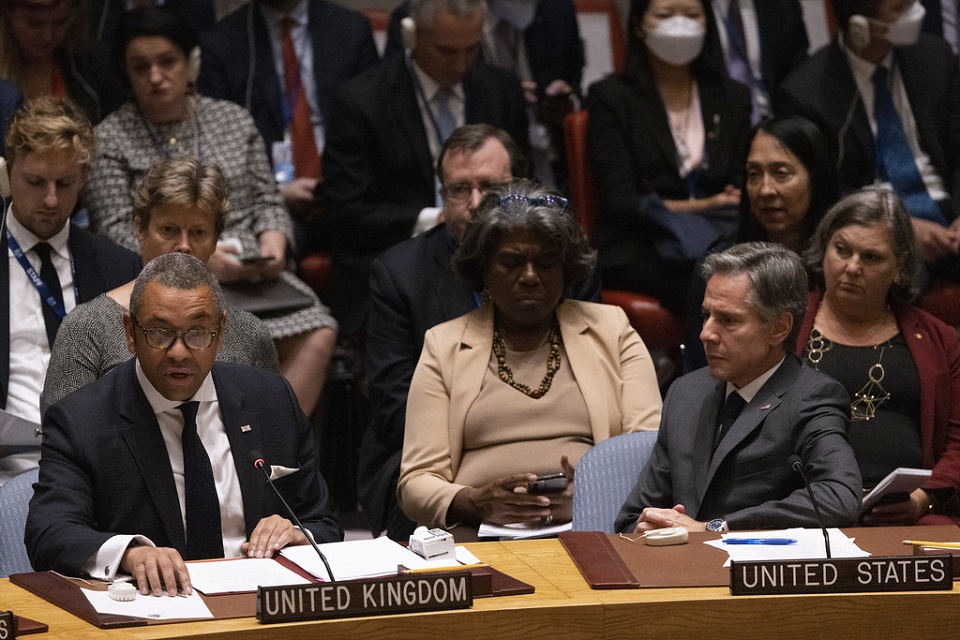 James Cleverly, the foreign secretary of the United Kingdom, made a statement at the United Nations Security Council meeting on Ukraine.

Location: UN Security Council, New York
Delivered on: 22 September, 2022
Transcript of the speech, exactly as it was delivered:

Seventy seven years ago, UN members agreed solemn principles in the UN Charter, vital for international peace and security. They undertook to refrain from the threat or the use of force against the territorial integrity, or political independence, of any state.

Yet 7 months ago, President Putin invaded Ukraine illegally and without justification he ignored the resounding pleas for peace that I heard in this Council on 17 February.

Since then, Ukrainians’ spirit of defiance, in defence of the protection of their country, continues to inspire free peoples and nations.

Every day, the devastating consequences of Russia’s invasion become more clear. UN agencies have confirmed more than 14,000 civilian casualties so far – and the actual total likely to be much higher more than 17 million Ukrainians in humanitarian need; 7 million displaced within Ukraine and more than 7 million Ukrainian refugees in Europe.

We see the mounting evidence of Russian atrocities against civilians. Including indiscriminate shelling and targeted attacks on over 200 medical facilities, and 40 educational institutions and horrific acts of sexual violence.

We see from the reports of the Office of the High Commissioner for Human Rights that in parts of Ukraine currently under Russian control civilians are subjected to torture, arbitrary detention, and forced deportation to Russia. And we have seen more grisly discoveries in Izyum.

It is not just Ukrainians who are the victims. President Putin’s war has spread hardship and food insecurity across the globe plunging millions of the world’s most vulnerable into hunger and famine.

And once again, as we’ve seen here today, Russia has sought to deny responsibility. It has tried to lay the blame on those who have rightly imposed sanctions on President Putin’s regime in response to his illegal actions.

To be clear we are not sanctioning food. It is Russia’s actions that are preventing food and fertiliser getting to developing countries. It is Russia’s tactics and bombs that are to blame for destroying Ukraine’s farms, infrastructure, and delaying its exports.

I sat here in February, listening to the Russian representative assuring this Council that Russia had no intention of invading its neighbour. We now know that was a lie.

And today I have listened to further instalments of Russia’s catalogues of distortions, dishonesty, and disinformation. He has left the Chamber. I am not surprised, I don’t think Mr Lavrov wants to hear the collective condemnation of this Council but we saw through him then and we saw through him today.

And we call on all countries to reject this charade and refuse to recognise any results. We are used to seeing Russia’s lies and distortions.

But let us listen to the testimony of Ukrainians who tell us about the reality of President Putin’s war.

Dr Olena Yuzvak, her husband Oleh and their 22-year-old son Dmytro, were abducted by Russian forces from their home in Gostomel, near Bucha, in March. The soldiers shot Oleh twice in the legs, before they were all blindfolded and bundled into an armoured personnel carrier.

I want you to hear Olena’s story in her own words:

First, they took us to a bombed-out house. The Russian soldiers kept saying they were going to kill us. My husband was left for hours lying on the floor in a pool of blood. I don’t know why. We’d done nothing wrong. Then they took my son away from us. I don’t know where. I don’t know if we’ll ever see him again. I just want my boy back.

Olena’s story, and those of many others, tell us the truth, the real truth.

This is a war of annexation. A war of conquest. To which President Putin now wants to send even more of Russia’s young men and women, making peace even less likely.

Mr Putin must understand the world the world is watching and we will not give up.

As members of the Security Council, we must unequivocally reject Russia’s attempts to annex Ukraine’s territory. We must make clear to President Putin that his attack on the Ukrainian people must stop, that there can be no impunity for those perpetrating atrocities and that he must withdraw from Ukraine and restore regional and global stability.

These are the reasons why Ukraine can, and must win.