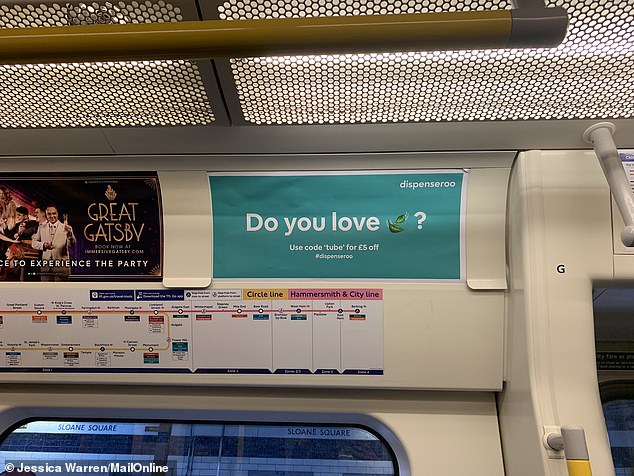 A cannabis delivery business called Dispenseroo, which uses branding similar to Deliveroo, was “flyposting” on the subway system by putting 2,500 paper ads for its offerings inside of train cars.

Following the three-week long guerilla marketing effort, the entrepreneur, a Londoner in his 20s, has subsequently disclosed that Dispenseroo is now producing roughly ‘£50,000’ each week in sales.

He said that the first campaign had “excellent” feedback from the general public and that by the end of 2022, sales should reach “£500,000 per week.”

He noted that advertisements for vending machines and digital billboards are in the works.

The tube advertisements asked: “Do you adore [leaf emoji]?” and offered a £5 discount voucher.

According to a TfL representative, the advertisements were “flyposted,” a problem that is being treated “very seriously.”

They informed MailOnline that “These advertisements are not authorized by TfL or our advertising partner Global.”

Flyposting is what it is, and we take it very seriously. Any of these posters detected on our network will be removed, as we have already told our contractors to do.

Dispenseroo’s website advertises free delivery for purchases over £200, as well as “frequent prizes and contests for our community,” in addition to selling the Class B narcotic for at least £40 for 3.5 grams.

The dispensary is described as operating “crop to door” as well.

The creator of Vice claimed, “I was constantly being bumped because I was young and always wanting to obtain the greatest cannabis. Since I can now get excellent marijuana, I wanted to spread the word.

He said that the medications were “ethically obtained” and did not include synthetic cannabinoids.

It is cultivated without the use of pesticides or synthetic chemicals. Child labor, bandos, and trap houses are not there; it is distant from such things. It originates from reliable sources. We deal directly with producers in California and the UK, he said.

“All the marijuana and goods are tested, and our vaporizers have lab results on the boxes so you can scan them and check what’s in the cartridge you are using.

The creator claimed to have been purchasing the Class B substance since he was 17 and is in favor of the drug having a controlled market in the UK.

According to him, this may include using a form of ID to confirm the customer’s age.

The US state of Washington, where it is allowed to use cannabis privately, is where the website is registered.

After more than 100 reviews on Trustpilot, users gave it a 4.7-star rating.

This is incredible, you guys are definitely going to be right [at] the top when cannabis comes to legalization, one customer commented in a review.

Another person said, “Saw the tube ads. believed that was impossible. Well, it does, dear reader. Delivery of some edibles [smoothly]. delivered with tracking via my amiable postwoman.

After renewing their cannabis purchases, others praised the website’s service as “legit” and “amazing.”

Do you love weed? reads the homepage of the website when it first loads. Then we have some happy news to share with you.

‘With Dispenseroo, you can now purchase everything marijuana-related. With exceptional customer service, next-day delivery if you place your purchase by noon, and a carefully chosen range of items.

To make sure the greatest and freshest items reach you, “We deal directly with producers.”

The following is from a about page: “The Dispenseroo crew, enjoy marijuana. That’s an understatement, to be fair. We just adore cannabis.

In fact, we have devoted our whole life to launching Dispenseroo.

“We want Dispenseroo to be much more than simply the largest dispensary in the UK, with next-day delivery for orders made before midday, live chat customer assistance, and fair pricing,” the company said.

We want it to become a movement.

As a “community of cannabis users striving to fix the stigma around cannabis and its good benefits,” the Dispenseroo team describes themselves.

They continue, “We are on a mission to always keep developing and campaigning for marijuana legalization in the UK.”

The website offers THC flowers, the euphoric component of the cannabis plant, and assures users that their information is “100% protected.”

The British Transport Police, which oversees the London Underground, said the Metropolitan Police was unable to respond.

We are not aware of any complaints of this, a British Transport Police official informed MailOnline.

According to Vice World News, the police have not been in touch with the firm.