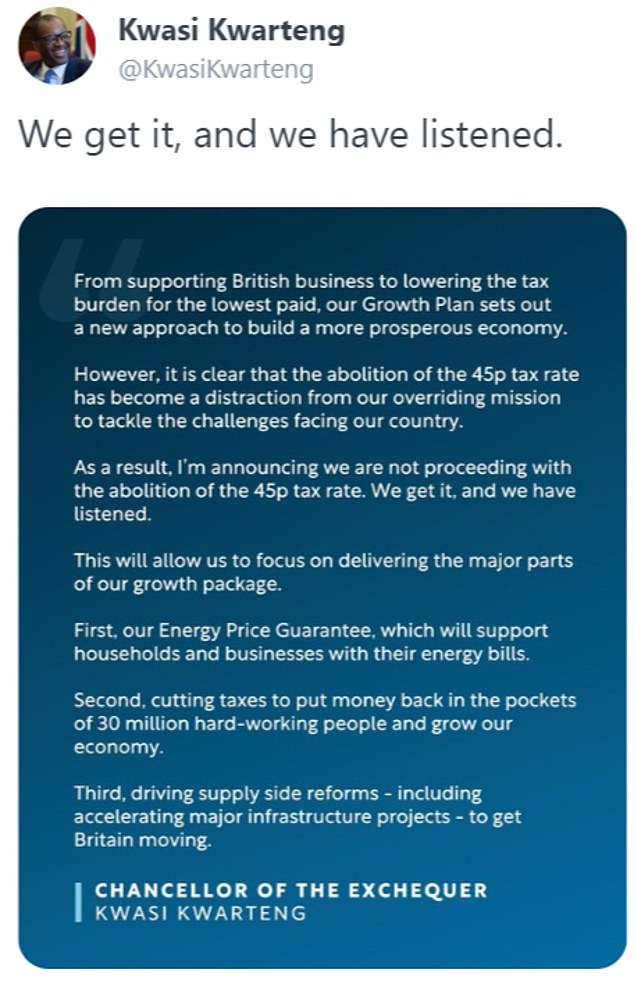 The pound rose today as the government reversed its intention to eliminate the 45p tax rate.

At one point, the pound reached 1.125 US dollars, recovering to levels observed before to the mini-budget. However, in early morning trade, the pound pulled back some of its gains to settle at 1.119.

Following Kwasi Kwarteng’s mini-budget, market instability caused the pound to drop to an all-time low of 1.03 US dollars.

This morning, following Mr. Kwarteng’s announcement, the pound surged to around $1.12, around its value prior to the September 23 budget announcements.

Following a U-turn by the government, it was confirmed this morning that the 45p tax rate would remain in place, causing the pound to surge.

The Prime Minister and Chancellor will no longer eliminate the 45p rate for those earning more than £150,000 annually, as it became apparent that dozens of MPs would not support the measure in the House of Commons. Mr. Kwarteng stated on Twitter, “We get it, and we have listened.”

To prevent a big Tory mutiny, Liz Truss and Kwasi Kwarteng today conducted an astonishing U-turn on proposals to eliminate the highest rate of tax.

The Prime Minister and Chancellor will no longer eliminate the 45p rate for those earning more than £150,000 annually, as it became apparent that dozens of MPs would not support the measure in the House of Commons.

Mr. Kwarteng stated on Twitter, “We get it, and we have listened.”

It is evident that the elimination of the 45p tax rate has become a diversion from our primary objective of addressing the difficulties facing our nation.

During a series of interviews this morning, the Chancellor stated that the controversy was obscuring the contents of a “strong package” but again refused to admit that it was a mistake.

Mr. Kwarteng responded to a question about whether he had a crisis meeting with Ms. Truss last night in which she instructed him to change course by stating, “We have talked constantly about the Budget… with regard to the 45p rate, we spoke to a large number of colleagues and people across the country.”

He hesitated to use the term “sorry” but stated, “There is humility and repentance… I am pleased to own it.”

When asked if he had contemplated resigning, Mr. Kwarteng responded, “Absolutely not,” on BBC Breakfast. I am examining the expansion strategy.

He also evaded the question of whether additional U-turns were possible when pressed.

As a result of the news, the British Pound rose about a cent against the U.S. dollar to $1.12, but it subsequently declined. This is close to where it was prior to the mini-Budget announcement on September 23 – pushing it to a record low of $1.03.

Michael Gove and Grant Shapps positioned themselves at the vanguard of the rebellion, warning that the legislation would be a “big diversion” and politically poisonous with average voters.

Ms. Truss took to broadcast studios only yesterday to defend the proposal and denied there would be a reconsideration, despite being accused of throwing Mr. Kwarteng “under the bus” by claiming he made the choice to proceed.

Chief Secretary Chris Philp was among the ministers who had expressed enthusiasm for the concept, saying that he would give the Budget a ‘9.5 out of 10’ despite the accompanying market pandemonium.

Mr. Shapps criticized the proposal as “politically naive,” while sources stated that Ms. Truss “may be gone by Christmas” if she does not back down in the face of “livid” MPs.

This morning, Ms. Truss tweeted, ‘The elimination of the 45pc rate had become a diversion from our aim to get Britain moving.

Our current focus is on creating a high-growth economy that funds world-class public services, raises wages, and generates opportunities across the nation.

Mr. Shapps stated that reducing the 45p tax rate “never could have worked.”

I had the impression that things were going quite quickly last night. Frankly, it was inevitable,’ he told the Today program on BBC Radio 4.

‘And I’m sure you’re aware of the false notion that you could force everyone into line or postpone this till next spring in order to alter the results, which was one of the recommendations made yesterday. This never could have worked.

This morning, in a series of interviews, Chancellor Kwasi Kwarteng stated that the debate over axing the 45p rate had obscured the contents of a “solid package.”

Ms. Truss confirmed the U-turn through Twitter less than twenty-four hours after stating that she was fully committed to the strategy.

Liz Truss and Kwasi Kwarteng will abandon their plan to abolish the 45p tax rate today.

The defiant Mr. Kwarteng informed media that he would pledge to “keep the course” with his intentions during his first conference speech as Chancellor.

Years of economic policy agreement have put Britain in a state of “slow, managed decline” that must be reversed, he was expected to remark.

Last night, though, rumors began to circulate that he and Ms. Truss would abandon the 45p policy in order to shore up Tory support for the rest of the mini-Budget initiatives.

One insider stated that as many as 70 Tory MPs were considering voting against the idea and are now urging Ms. Truss to delay the removal of the 45p rate by one year.

The administration had no reason to hold a vote on the 45p rate prior to the fiscal statement expected on November 23, given that the abolition was not scheduled to occur until April.

Ministers of the Cabinet informed MailOnline that they anticipate the crucial fight over the Finance Bill to occur in December or maybe January.

The legislative procedure dictates that a resolution must be passed within ten sitting days, although it does not have to include all tax changes in a bundle. Within thirty days, the Finance Bill must receive its second reading from the House of Representatives, the crucial vote.

However, Labour might have compelled a vote on an Opposition Day motion, which the administration may have found difficult to disregard. Conservative rebels were considering joining the Labour party.

In a preemptive assault yesterday, Mr. Gove stated that using “borrowed money” to support the elimination of the 45p income tax rate was “not conservative.” Mr. Shapps repeated his sentiments, stating that the government should not provide “large handouts to people who need them least.”

Mr. Gove’s intervention has prompted contested charges that he is acting as an outrider for Rishi Sunak, whom he supported in the Tory leadership battle against Ms. Truss.

After Mr. Gove criticized the idea to reduce the top tax rate as a “show of the wrong principles,” a number of Sunak-supporting lawmakers spoke out against the plan.

Today in The Times, Mr. Shapps, who also supported Mr. Sunak, wrote: ‘This politically clumsy cut, not even a huge revenue raiser and hardly a priority on the prime minister’s to-do list, has managed to alienate almost everyone, from a large portion of the Tory parliamentary party caught off guard to the City traders who will actually benefit.’

A member of the No. 10 staff branded the former minister as “deluded.”

Another ally stated that his choice to visit the conference and criticize the government’s policy was “massively damaging, but tragically predictable.”

He stated, “It is Sunday, the first day of a new Tory leader’s conference, and Michael Gove is out there stabbing her in the back. Isn’t the removal of one prime minister sufficient for him?

Someone must confiscate his blades; he is a threat to the safety of the partygoers. He claimed he was leaving politics, but it turned out to be too good to be true, and now he’s back to destabilize a new prime minister.

Yesterday, Ms. Truss stated that the controversial tax cut was “part of a comprehensive plan to simplify and reduce our tax structure.”

She emphasized, however, that it was a very minor Budget policy in comparison to the Energy Price Guarantee, which might ultimately cost £150 billion.