Skip to content
Home » News » Breaking News » This designer can construct a purse out of a toilet, ranch dressing, or a fish tank 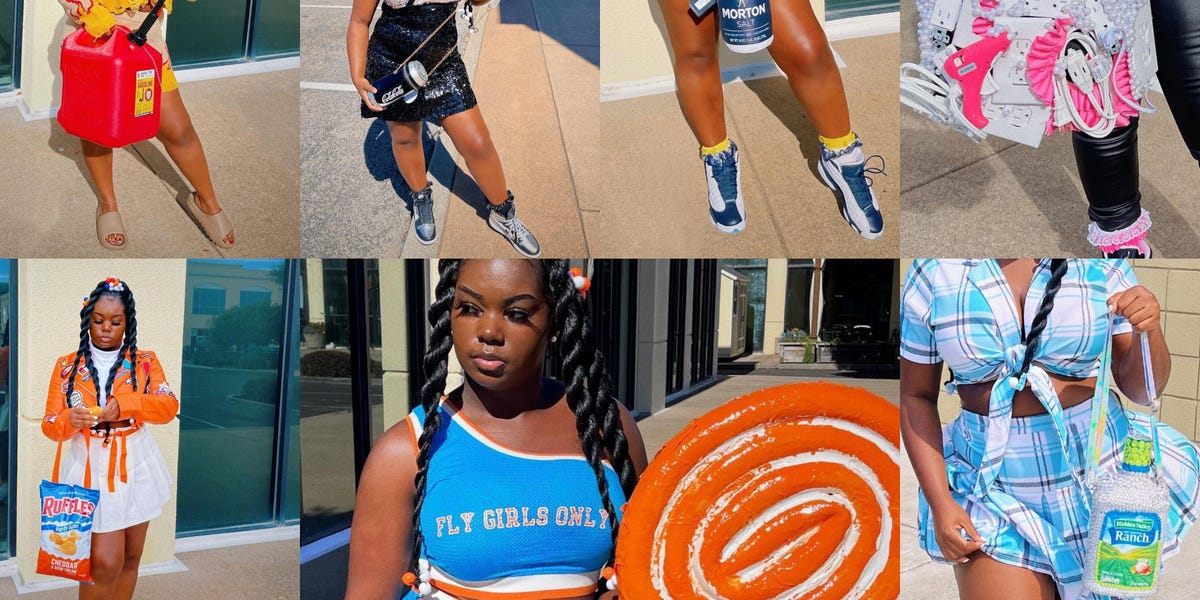 Her over 100,000 Instagram followers, or more than half a million TikTok fans, frequently await to see what new object Holmes transforms into a handbag.

“A handbag completes an ensemble,” the 24-year-old told Insider. I consider a purse to be a statement piece.

Holmes’ handbags become viral due to the fact that she produces them herself using common, frequently discarded materials, such as potato chip bags, shoes, and even a fish tank.

Her commitment to fashion runs deep in her roots.

Holmes used to see her elder sister, who was like a second mother to her, put together outfits that were dramatically unlike from those of her peers. Her neighborhood in Richmond, California also held annual fashion festivals.

Holmes told Insider, “I would say that is what encouraged me to start creating,” adding that she routinely attended and participated in fashion events.

Also, there was an art gallery around the corner from Holmes’ childhood home that she frequently visited. After winning local competitions, she even had some of her work exhibited there.

If I could transform this into a purse, it would be incredible.
Holmes headed to Home Depot to get a toilet for purse construction.

With thanks to Jada Holmes/ @afropuffjada

Holmes originally got popular in 2020 for a Lucky Charms-made cereal bowl purse that matched her footwear. She combined glue and white ink to imitate the effect of milk.

“I created the cereal bowl purse to coordinate with my Candy Dunks. I was unable to find a purse that matched all the colors of my Dunks “Holmes stated on the purse, which garnered more than three million views on Tik Tok. “So, as I was eating that cereal, I thought, “This cereal goes great with my Dunks.” If I could transform this into a pocketbook, that would be great.”

Holmes’ unique handbags are inspired by song lyrics that she employs as photo captions. The inspiration for her fish tank purse, for instance, came from the lyrics of rapper Lil Baby: “A shark in the sea, you swim with the little fishes.”

The inspiration for her fish tank purse came from the lyrics of rapper Lil Baby: “A shark in the sea, you swim with the little fishes.”

Thanks to Jada Holmes

Her inventive ideas for purses make her a daily customer at the local Joann Fabrics store, where she purchases the required supplies to accomplish her next grand vision. She typically places her order online, so she does not need to exit her vehicle when she arrives at the store.

The designer remembers converting a brand-new toilet into a purse.

She desired a bag that complemented her new Jordan 6s and searched for the ideal bag. She initially considered constructing it out of toilet paper, but she knew she wanted it to be impressive. After abandoning that plan, she decided immediately to get a complete toilet from Home Depot.

“I made the toilet…, received the strap, and thought, ‘It needs a little more pizazz,'” she said, adding that she went to the fabric store to purchase pearls and spent hours embellishing the toilet.

Thanks to Jada Holmes

Holmes’s collection continues to expand over time. Her aim is to build a purse-focused pop-up museum in different places. Each area would have a theme based on her creations, and guests would be able to pose with her handbags.

She stated, “I have a room designed specifically for the toilet purse, with a bathroom motif.” “The next room would be the cereal purse, which would be a room filled with cereal. The following room would house the ranch’s money.”

She went on: “Many of my purses are heavy, and I’m fairly certain that no one would want to carry a toiletry bag because it is so hefty. If I could have a place to display my handbags, that would be fantastic.”

Holmes’s design philosophy originates from her desire to reinvent, much like that of one of her idols, the iconic Harlem designer Dapper Dan.

In addition, she admires rising fashion star Telfar Clemens, the creator of the most recent “It” bag.

“I consider Black designers to be culturally significant since they are the originators of several ideas. I believe that because it is initially referred to as “ghetto” until it is glamorized by the fashion industry, “She stated,

I believe it’s crucial for Black designers to be able to break down these barriers and stand alongside Louis Vuitton and Gucci.

»This designer can construct a purse out of a toilet, ranch dressing, or a fish tank«