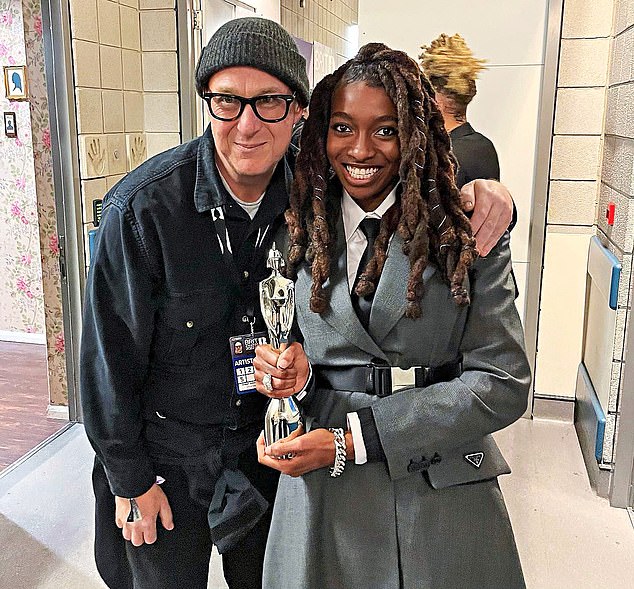 A few weeks previously, the British rap sensation who won one of the music industry’s most coveted honors fired her longtime manager.

Little Simz was announced as the winner of this year’s Mercury Prize at the star-studded ceremony held at the Hammersmith Apollo in London on Tuesday.

She told the audience that she was “overwhelmed” to receive the award for her 2021 album Sometimes I Might Be Introvert.

The London-born performer, whose real name is Simbiatu Ajikawo, astonished industry insiders by omitting to acknowledge the contribution made by her longtime manager Rob Swerdlow to her success.

The Mail on Sunday has learned that Little Simz, 28, dumped Mr. Swerdlow, who had managed her since 2015, only weeks ago, a choice that, according to his pals, left him “completely devastated.” One added, “Rob was in the trenches with her during the difficult times.”

He was responsible for helping her through adversity to her current position. Many people hope he receives the recognition he deserves. Rob adored her and enjoyed being her manager, so it is understandable that he finds this difficult.

Rob’s name was the talk of the night after Simz was announced as the winner, according to another manager who attended the awards ceremony.

Mr. Swerdlow was by the star’s side as she signed a publishing contract with a major label. Despite winning the Brit Award for Best New Artist this year, Simz had fought for years to achieve recognition.

In a recent interview, she hailed Mr. Swerdlow as “very knowledgeable” and “open to new ideas.”

Mr. Swerdlow, who manages indie band The Kooks, praised the rapper in the same interview with Music Week, stating, ‘Very rarely do you find an artist who can work in a global, intellectual, and culturally relevant musical environment and stand up 100 percent for independence… Simz never compromises.’

However, she is no longer listed on his company’s website, Starwood Management.