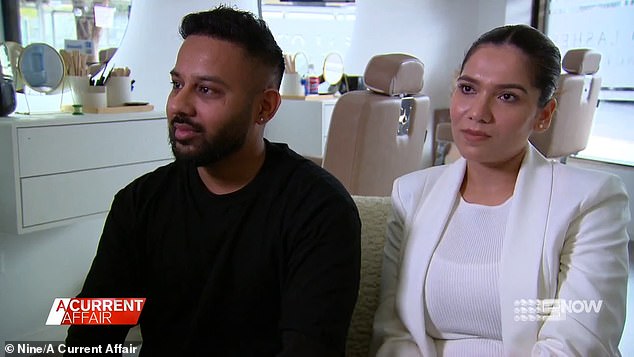 The owner of a beauty salon is enraged when a heartless burglar took her purse, which contained $800 for an orphanage in India.

The lady was seen on surveillance footage creeping up to the front counter at Lips to Lashes Beauty in Padstow, southwest Sydney.

Before reaching across the counter and fleeing with the expensive purse belonging to the store’s owner, Gurmeet Kaur, she is seen stealing a mentos from a jar on top.

Gurmeet, who was in the space adjacent to the front desk, said she was unaware the lady had entered her business.

She said to A Current Affair, “I didn’t hear anything… she was passing through, (there was) no one in the front, so she tried her luck.”

She arrived very stealthily, seized my luggage, and then vanished.

Gurmeet found her luggage was missing just as she was going to leave for lunch when she was with a customer.

Guermeet’s husband, Addy, was ready to transfer $800 from the bag to an orphanage in his hometown of India.

As part of his birthday tradition, Addy always gives money to the orphanage.

The pair admits it will be “challenging,” but they are determined to raise the funds once again.

“I was stunned.” Law and order are not in disarray here; we do not live in a third-world nation,’ Addy remarked.

Gurmeet posted video and pictures of the burglar on the Facebook page of her company and asked her fans whether they had seen the lady.

She added, “This woman casually comes in my salon as I was getting ready for the day and spoke to the customer in the room.”

She pulls my purse out from beneath the front desk. Even though it was deep within the desk, she leaned out to get it and then walked out without anybody seeing.

“I want everyone to take a closer look at the video and the picture, and if you recognize this woman, please contact the police,” she said.

Gurmeet went on to say that she thinks the lady is a local since many of her customers have reported seeing her “roaming about in the neighbourhood.”

The lady is still wanted by the police.