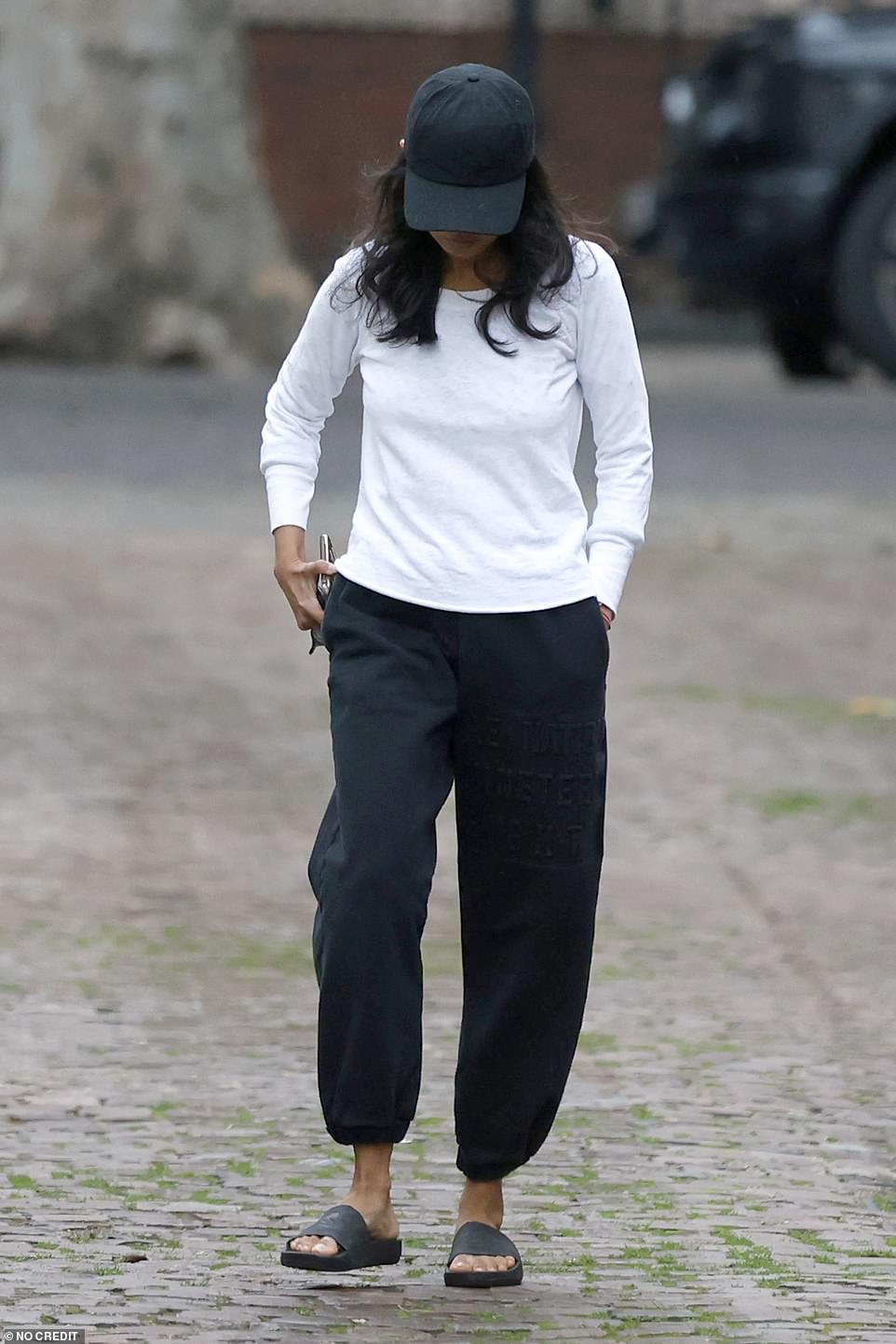 Akshata Murty, Rishi Sunak’s multimillionaire wife, was spotted for the first time since her husband became Prime Minister, as the family prepared to move into 10 Downing Street.

Mrs. Murty was photographed leaving the couple’s London home in casual attire this morning, as Britain’s new prime minister prepares to move back into No10, barely six months after departing Downing Street for his £6.6 million Kensington townhouse.

As chancellor, the former Goldman Sachs banker resided in the No. 10 apartment, as opposed to the No. 11 apartment above which the senior Treasury minister typically resides.

Mr. Sunak, his wife, his daughters Krishna and Anoushka, and the family labrador Nova relocated in April to be closer to the £22,000-per-year premium school for their children.

The then-Chancellor divided his time between the two residences, but his family continued to reside in west London.

It is believed that Mr. Sunak will return to the No. 10 flat, where he and his wife were claimed to be’very happy’ despite widespread speculation that the future prime minister may opt to return to this living arrangement rather than reside in Downing Street full-time.

Mrs. Murty (left) and her family are prepared to move from their Kensington mansion to No. 10 Downing Street.

It is believed that Mr. Sunak will return to the No. 10 flat, where he and his wife were reportedly’very happy’

It implies that Mr. Sunak will not reside in the larger apartment above No. 11, which has been the norm for prime ministers since 1997, when Sir Tony Blair seized power.

Boris Johnson and his wife Carrie remodeled the apartment for an estimated £200,000 during the infamous ‘wallpapergate’ controversy, which contained gold wallpaper that cost thousands of pounds.

Mr. Sunak still owns the London townhouse, and if he wants to get away from Downing Street, he and his family will be able to spend weekends at the Prime Minister’s official country retreat, Chequers, in addition to their London homes and North Yorkshire constituency home.

Since 1735, Downing Street has been the official residence of the British Prime Minister and the location from which the nation’s leaders have weathered international wars, financial crises, and pandemics.

The Oxbridge-educated former Goldman Sachs banker and his Stanford-educated spouse are by far the wealthiest occupants of Downing Street in history, with an estimated net worth of £730 million. This includes multiple properties in Britain and the United States, a string of business interests, and a fleet of cars including ‘high-spec’ Range Rovers, ‘top-of-the-range’ Lexuses, and a BMW.

Rishi Sunak and his billionaire heiress wife Akshata Murty are by far the richest Downing Street residents in history.

Rishi Sunak and his wife Akshata have two children, Krishna, 11, and Anoushka, nine.

Ms. Murty is rumored to be wealthier than even King Charles III; here, the new prime minister and his wife attend a banquet for the British Asian Trust at the British Museum in London with the king in February of this year.

In March of last year, then-prime minister Rishi Sunak held the budget box at his official house at 11 Downing Street.

Ms. Murty is rumored to be richer than even King Charles III due to her £430 million stake in her wealthy father’s IT firm.

She has also continued to hold stakes in businesses over the years, including a joint venture with Amazon, Cloudtail, in India worth £900million a year, a project she and Rishi co-founded, Catamaran Ventures UK, shares in the company that runs Jamie Oliver’s Pizzeria and burger chain Wendy’s in India, and Etonian tailor New & Lingwood, which makes pupils’ tailcoats costing £2,500 each.

Rishi’s father-in-law, dubbed “India’s Bill Gates” for his pioneering role in the country’s tech boom, was recently ranked the sixth richest person in India and the 654th richest person in the world after his remarkable success in founding Bangalore-based IT firm Infosys in the 1980s, now a £9.6billion multinational with more than 345,000 employees.

More than 1,000 guests were invited to their daughter’s wedding to Rishi in 2009, including Indian actor Girish Karnad, cricketers Anil Kumble and Syed Kirmani, former champion badminton player Prakash Padukone, business tycoon Azim Premji, known as the tsar of the Indian IT industry, and billionaire entrepreneur Kiran Mazumdar-Shaw, chair of a biotechnology company in Bangalore.

According to the depiction of their lives in Sudha’s 2017 book Three Thousand Stitches, Mr. Sunak’s in-laws are introverts who live cheaply, do their own dishes, and like nothing more than reading books, despite their staggering fortune.

This is the incredible network of residences and enterprises that Mr. Sunak and his wife Akshata are connected to.

Downing Street’s revelation that the new prime minister will not be attending the Cop-27 climate summit in Egypt next month has sparked controversy over Rishi Sunak.

Downing Street’s revelation that the new prime minister will not be attending the Cop-27 climate summit in Egypt next month has sparked controversy over Rishi Sunak.

No. 10 stated that his absence from the international conference in Sharm el-Sheikh will let him to focus on “other critical home obligations.”

The Cop-27 summit will take held between November 6 and 18, with the participation of world leaders anticipated during the first week.

Mr. Sunak revealed proposals for an Autumn budget on November 17 in an effort to address a hole in the public finances caused by recent economic upheaval.

Labour accused the prime minister of a “major leadership failure” and claimed he was now “absent in action” on climate concerns.

The climate conference will take place one year after the United Kingdom held the Cop-26 meeting in Glasgow, which was attended by a number of Cabinet members, including Mr. Sunak as Chancellor.

A No10 official confirmed that Mr. Sunak will not be attending this year’s follow-up summit by stating, ‘The PM is not expected to attend Cop27 owing to other pressing domestic commitments, notably the preparation of the Autumn budget.

The United Kingdom will be fully represented by key ministries in addition to Cop President Alok Sharma.

Downing Street claimed the prime minister remained “totally committed” to supporting the climate conference and rejected that his choice to forgo the summit indicated a reduction in the importance of climate concerns to the government.

The spokesperson for the White House stated, “We remain committed to net zero and to leading international and local efforts to combat climate change.”

The United Kingdom is ahead of several other nations in terms of net zero emissions.

‘We will continue to work closely with Egypt as the hosts of Cop-27 and to ensure that all nations are meeting the historic pledges they made at the Glasgow climate deal,’