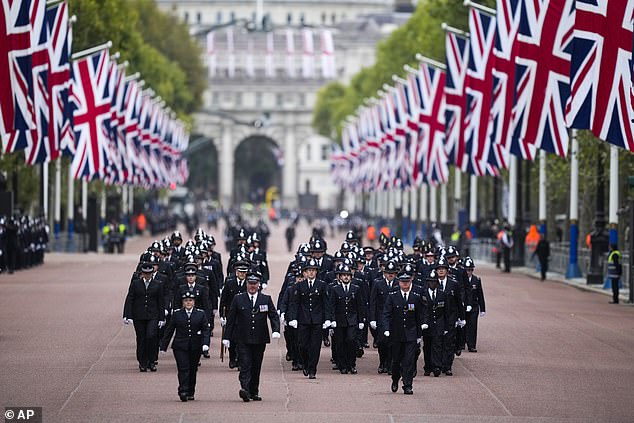 The man in charge of organizing policing throughout the Queen’s funeral and national time of mourning has characterized Operation London Bridge as “a tremendous success.”

More than 5,000 police officers from throughout the United Kingdom participated in 10 days of ceremonies commemorating the passing of Queen Elizabeth II.

Local activities are supported by tens of thousands of extra officers.

Chief Constable Lucy D’Orsi, the gold commander for Operation London Bridge, stated, ‘From a policing standpoint, I believe it was a tremendous success. This operation differed from normal ones because there was no prior warning.

D’Orsi, the chief of the British Transport Police, stated that extensive preparations were made to safeguard the festivities from a potential terrorist assault.

Chief Constable Lucy D’Orsi, the gold commander for Operation London Bridge, stated, ‘From a policing standpoint, I believe it was a tremendous success.

‘What distinguished this operation from typical ones was that there was no prior warning.

The operation began the moment we learned of the death of Her Majesty, making it fundamentally distinct from all preceding operations.

She noted that it was too early to estimate the whole cost of the exercise, which was the greatest ceremonial policing operation ever conducted.

Ms. D’Orsi, who has served as chief constable of the British Transport Police since March 2021, stated that the operation involved the “biggest ever deployment of hostile vehicle mitigation,” with enormous vehicle barriers blocking the entrances to central London roads such as The Mall.

Unfortunately, terrorist attacks in the past have utilized the automobile as a weapon, so it is crucial that regions are cordoned off to protect the public.

Ms. D’Orsi commended the officers and staff that participated in Operation London Bridge, as well as the members of the public who “recognized the additional security measures in place for such an event and supported police officers, employees, and volunteers in their tasks.”

During the 10 days of mourning, over 650 protection officers, weapons officers, and armed response vehicles were deployed, and over 500 specially trained search teams were dispatched to significant sites and buildings where people gathered.

The day of the Queen’s funeral was the greatest police operation ever conducted by the Metropolitan Police, surpassing the opening and closing events of the 2012 London Olympics.

Home Secretary Suella Braverman stated, ‘This was the largest ever ceremonial policing operation, with thousands of officers from forces across the United Kingdom deployed to manage and oversee this unprecedented event, ensuring the safety of the Royal Family and foreign dignitaries during the state funeral.

I have personally witnessed the professionalism, devotion, and expertise of policemen, who should be incredibly proud of their work.