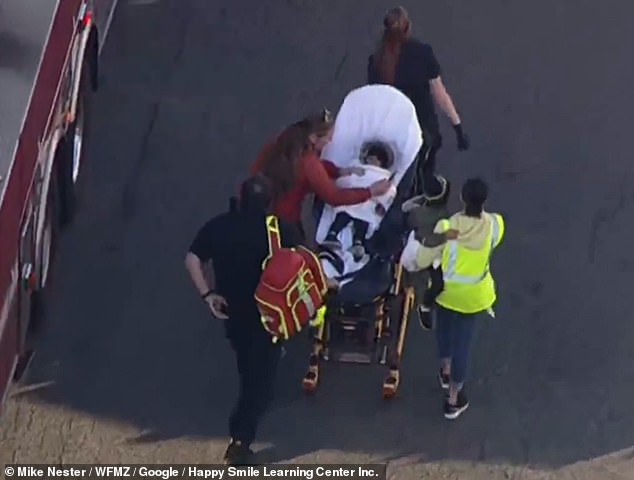 In Allentown, Pennsylvania, there may have been a carbon monoxide leak at a nursery, which has resulted in the hospitalization of more than 20 persons, many of them children.

27 individuals were sent to four hospitals in the Lehigh Valley, according to officials, and their conditions are stable at this time.

UGI told DailyMail.com that they had several cops on the scene and that a “malfunctioning heating unit as well as a clogged venting system” were to blame for the leak.

According to reports, the situation is a class 1 mass casualty, which means that the amount of victims might overwhelm medical personnel and first responders.

Following the breach on Tuesday morning at the Happy Smiles Learning Center on Wabash Street, a number of kids have been unwell.

Captain John Christopher of the Allentown Fire Department verified that there were 25 kids in the daycare and that they will be examined by doctors.

While some of the parents brought their own kids to the hospital, others were being evaluated outside the structure.

The extent of the diseases or injuries is unknown, with the most badly affected being transferred first.

There were eight employees in the building at the time of the leak, but it is unclear whether any were brought to the hospital.

Capt. Christopher stated that a 911 call made at 6:51 a.m. was originally for a youngster who was unresponsive and needed medical attention.

When firefighters arrived on the site, their air quality detectors informed them of the carbon monoxide leak.

Every Allentown ambulance was in use, he said, and all of the kids were finally transferred to a hospital to be watched.

After afterwards, the facility was shut down because several patients were exhibiting carbon monoxide poisoning symptoms.

Stretcher-borne children were evacuated from the premises and are now being transported to many hospitals around the Lehigh Valley.

Ambulances and firetrucks were only a few of the emergency services that were there.

According to 69 News, some youngsters were still awaiting transportation at approximately 8am.

Parents have been informed of the event, according to officials, and they are working with childcare center staff to keep everyone updated.

A nearby nursery has opened its doors in an effort to keep kids warm and safe.