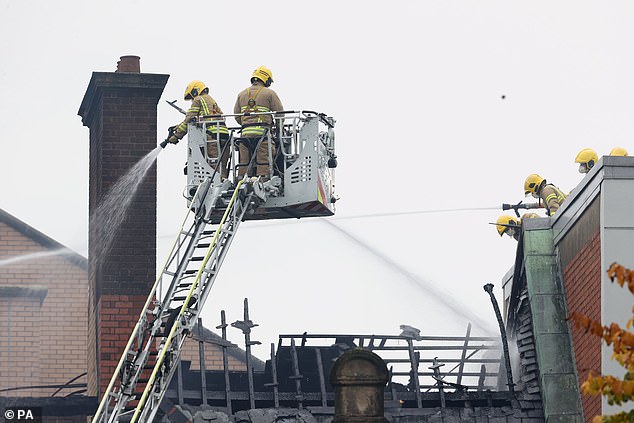 In the wee hours of this morning, more than 50 firemen were sent to Belfast to put out a fire at a historic structure.

At 5.37 am, the Old Cathedral Building on Donegall Street in Belfast’s Cathedral Quarter received a fire notification.

A variety of tiny creative enterprises are housed in the structure.

Eight fire appliances from Belfast, a Command Support Unit from Lisburn, two aerial appliances, 52 firefighters, and five officers are there, according to a Northern Ireland Fire and Rescue Service (NIFRS) spokeswoman.

Owners of businesses saw their labor “actually go up in flames.”

Owner of Excalibur Press Tina Calder said: “I received a call this morning shortly before 6am.” Excalibur Press has offices inside the structure. Tina, your building is on fire, my brother, a security guard at Ulster University, informed me.

Naturally, I sprang up, grabbed a cab, came here, and for about an hour and a half, just stood here sobbing as I watched the building catch fire.

As she continued to see the building burn, Ms. Calder called the landlord, agent, and further tenants.

It was really heartbreaking for her to see people’s studios go, she said. The studio where one guy made violins was no longer there. There are illustrators who have works there.

We can already see that there will likely be severe water and smoke damage to our premises. Today, all five of my employees are working from home.

It’s amazing to see the Cathedral Quarter neighborhood join together to assist us. “We’ve got a tremendous eruption of support from the community here, asking what they can do to help.”

Elly Makem, a freelance artist with a studio space in the structure, told the BBC that she saw her work “actually go up in flames.”

She said on the BBC’s Good Morning Ulster show that “that building is where all of my work is.”

“I have actual works that I haven’t yet delivered to customers, as well as a £3,000 laptop that I purchased last year that included all of my work.”

“That structure contains every piece of equipment I’ve accumulated over the last eight years.”

“I worked so hard to try to make it as a freelancer; it’s simply witnessing everything actually go up in flames,” the author said.

‘Heartbroken for the many amazing small companies, organizations & artists situated in Cathedral Buildings in Donegall St this morning considering everything they provide to the neighborhood,’ Ulster University professor Declan Keeney posted on Twitter.

“Sad to see this building and its legacy suffer such severe fire damage.”

This morning, our thoughts are with our neighbors.

I brought up the matter with Belfast City Council’s chief executive to see what kind of immediate assistance may be offered.

All Metro and Ulsterbus routes will avoid the area until further notice, according to Translink.

Firefighters are still on duty.

»Old Cathedral Building in Belfast is on fire«