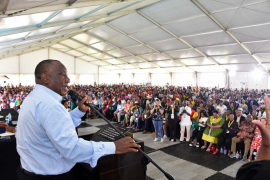 President Cyril Ramaphosa has praised the Northern Cape for its investment potential and as a future destination for major investments.
In comparison to other provinces, the Northern Cape has been able to create more jobs and the unemployment rate continues to fall, according to the President.
“The Northern Cape is a major target for forthcoming large investments. The President stated, “I was in Saudi Arabia, and firms that perceive investment prospects in the Northern Cape with regard to solar, renewables, and green hydrogen [electricity] want to come here and nowhere else. I hope you are all prepared for the investments that will be arriving here.”
The President spoke during the 5th Presidential Imbizo, which was hosted at the Mxolisi Dickson Jacobs Stadium in the ZF Mgcawu District of Upington, Northern Cape.
To date, President Ramaphosa has visited and met with communities in five provinces: North West, Free State, Mpumalanga, Gauteng, and Northern Cape.
The Presidential Imbizo is a forum for the President to connect with communities about their everyday lives and government service delivery.
President Ramaphosa stated that the province possesses tremendous potential.
“Investments will continue to flood in, and our government will also begin focusing on innovative ways of doing things… “We need to be forward-thinking and capable of financing schools that need to be built now, as well as projecting the finances into the future,” he said.
Similarly, the President stated that his administration should do the same with housing, which is one of the most pressing issues voiced by the community.
“We intend to implement these marvelous experiments in the Northern Cape, and we will do so.” The President stated, “I would want to express my appreciation to everyone who participated in the imbizo with discipline, commitment, and patience.”