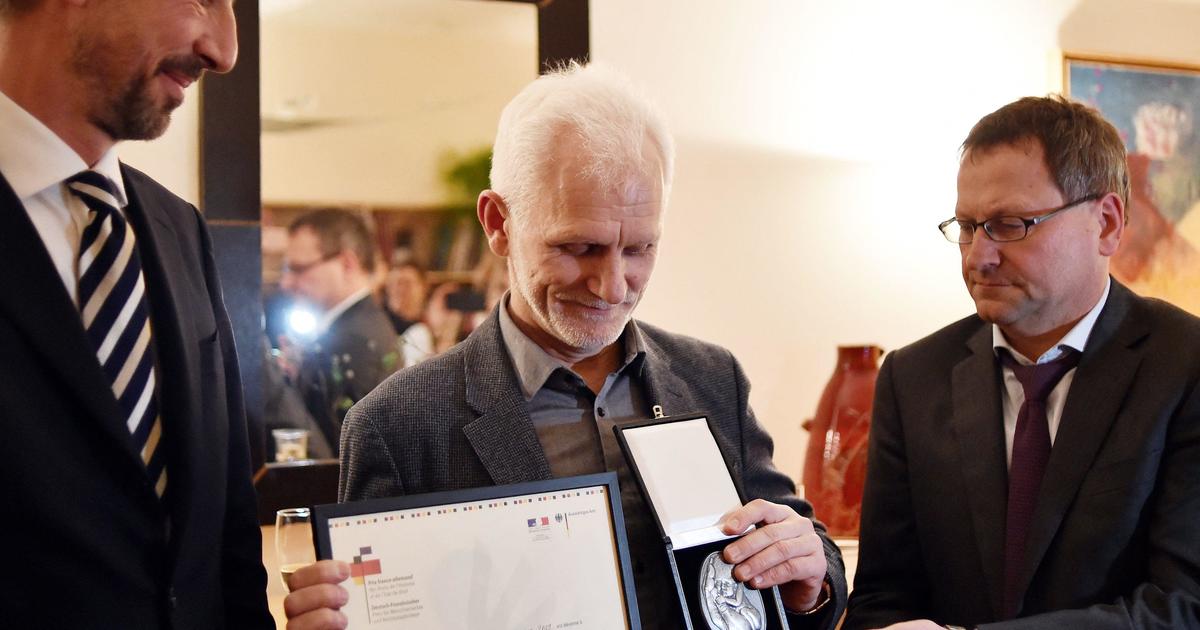 Oslo — Ales Bialiatski, a human rights activist currently imprisoned in Belarus, along with which human rights organizations, the group Memorial in Russia, and the Ukraine Center for Civil Liberties, were announced as the 2022 Nobel Peace Prize winners on Friday at the Norwegian Nobel Institute in Oslo, Norway.

Ales Bialiatski, a Belarusian human rights activist, is received the Franco-German Prize for Human Rights and the Rule of Law on December 11, 2019 in Minsk by the French and German ambassadors to Belarus, Didier Canesse and Manfred Huterer. SERGEI GAPON/AFP courtesy of Getty Images

All of the organizations have sought to draw attention to human rights violations in Ukraine, Russia, and Russia’s close ally Belarus in the context of President Vladimir Putin’s ongoing war in Ukraine.

“They have made an extraordinary effort to chronicle war crimes, violations of human rights, and abuses of authority. Together, they highlight the importance of civil society for peace and democracy “Berit Reiss-Andersen, the head of the Norwegian Nobel Committee, said reporters.

The Nobel Committee immediately demanded the release of Bialiatski, who is currently imprisoned on tax evasion accusations in his home Belarus.

Reiss-Andersen told reporters, “Our message is an urgent request to the Belarusian authorities to free Mr. Bialiatski so that he can travel to Oslo and accept the distinction bestowed upon him.”

NATO Secretary-General Jens Stoltenberg tweeted his congratulations to the victors, stating that “the right to speak truth to power is essential to free and open societies.”

In March, Russian authorities led by Vladimir Putin raided the headquarters of Memorial, one of Russia’s oldest and most important human rights organizations.

“The police refused to let me and my attorney in without explanation, and when I refused to let in reinforcement cops wearing bulletproof vests and masks, they threatened to use force,” stated the chairman of International Memorial at the time, Yan Rachinsky. This is the current state of justice in the Russian capital.

Members of the human rights organization Memorial attend a press conference in their Moscow office on November 18, 2021, as the Putin dictatorship moves to disband the group. via Getty Images: ALEXANDER NEMENOV/AFP

Since obtaining the award, last year’s awardees have endured adversity. Dmitry Muratov of Russia and Maria Ressa of the Philippines have defied government efforts to muzzle them by battling for the survival of their journalistic enterprises.

Last year, they were awarded for “their efforts to protect freedom of expression, a prerequisite for democracy and sustainable peace.”

Muratov auctioned off his prize to generate funds for Ukrainian child refugees this summer. It sold for $103.5 million, breaking the previous record for a Nobel Prize.

Monday marked the beginning of a week of Nobel Prize announcements, with the Swedish scientist Svante Paabo winning the prize in medicine for uncovering the mysteries of Neanderthal DNA, which provided crucial insights into our immune system.
Tuesday, three scientists earned the prize in physics jointly. Quantum entanglement is a phenomena demonstrated by the Frenchman Alain Aspect, the American John F. Clauser, and the Austrian Anton Zeilinger. This phenomenon can be utilized for specialized computing and information encryption.
The Nobel Prize in chemistry was awarded to Americans Carolyn R. Bertozzi and K. Barry Sharpless, and the Danish scientist Morten Meldal on Wednesday for developing a method of “snapping molecules together” that can be used to explore cells, map DNA, and design drugs that can more precisely target diseases such as cancer.
Thursday, French author Annie Ernaux was awarded this year’s Nobel Prize in literature. The panel praised her for bravely mining her experiences as a working-class woman to analyze life in France since the 1940s in books that combine fiction and autobiography.
On Monday, the 2022 Nobel Prize in economics will be announced.
On December 10, 10 million Swedish kronor (about $900,000) in cash rewards will be awarded. The funds were provided by the prize’s originator, Swedish inventor Alfred Nobel, in his will in 1895.