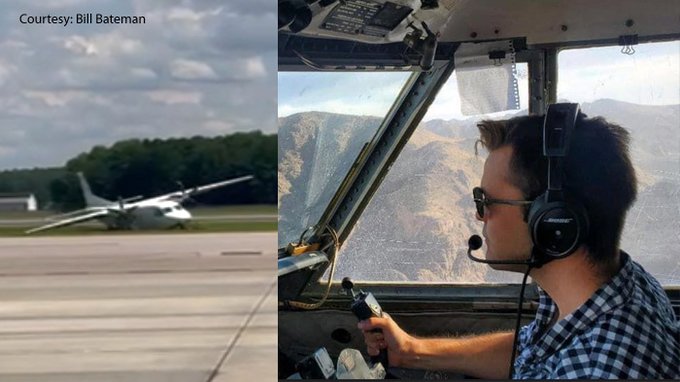 The co-pilot of a small cargo plane died on Friday when he exited the aircraft in North Carolina just before it made an emergency landing. The National Transportation Safety Board announced Tuesday that it has initiated an investigation into the incident.

The body of the co-pilot, 23-year-old Charles Hew Crooks, was discovered in a backyard in the town of Fuquay-Varina, roughly 30 miles south of the Raleigh-Durham International Airport, according to CBS affiliate WNCN-TV. He did not have a parachute.

The CASA 212-200 aircraft’s pilot reported that one of the wheels had come off the landing gear on Friday afternoon, and he made an emergency landing at the airfield. He received medical attention, had minor injuries, and was then discharged.

When the turboprop plane landed, there was only the pilot inside.

According to WNCN, calls to air traffic control provide some information regarding the circumstances preceding that emergency landing.

“Emergency, we’ve lost our right wheel, we’d like to proceed to Raleigh and made a landing at Raleigh,” one pilot can be heard saying to air traffic controllers. It’s unclear whether it’s Crooks speaking or the other pilot on board, who has not yet been publicly identified. From there, the person explains what happened.

“We were attempting to land, we made contact with the ground, had a hard landing, and decided to go around, and at that point we lost the wheel,” the man can be heard saying.

The pilot never mentions a passenger jumping or falling from the plane during that recording. However, in a another clip, you can hear the rescue personnel mention that Crooks, a later recognised passenger, left the aircraft at some point.

Hew Crooks, Crooks’ father, told WRAL-TV that his son had been a flight instructor for more than a year.

“He said a couple weeks ago, he wouldn’t trade places with anybody in the world. He loved where he was,” he told the station, adding: “I can’t imagine what happened.”

Questions linger on whether pilot fell or jumped from plane before emergency landing at RDU https://t.co/QPAY7g2phv pic.twitter.com/cbPBJXTQyv