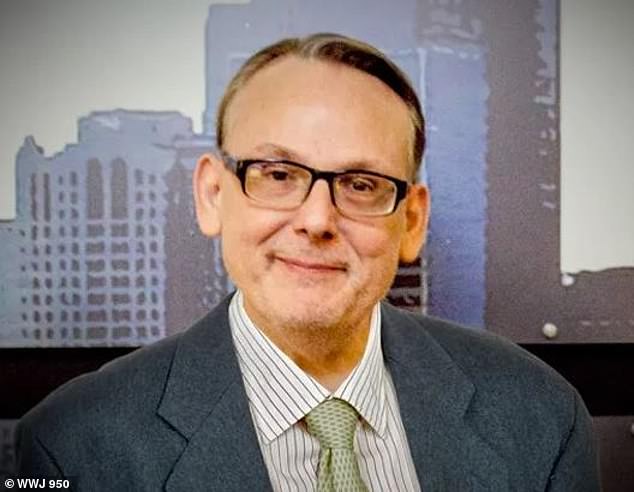 The murder and attempted suicide of a Detroit news anchor, his girlfriend, and their two children was committed by a 54-year-old ‘regular visitor’ to the radio host’s Michigan home, according to police.

The attack occurred around noon on Friday, according to authorities, when Jim Matthews, an overnight anchor at WWJ950, welcomed the suspect, who is presently hospitalized, to his house in Chesterfield Township, a quiet Detroit suburb.

Shortly thereafter, police were called to the apartment, where they discovered Matthews, 57, deceased and his girlfriend, 35, with multiple stab wounds.

The couple’s 10-year-old daughter was discovered tied up in a closet with severe head injuries, according to police. She was hospitalized immediately, and her present health is currently unknown.

The unidentified lady, Matthew’s live-in girlfriend, was also hospitalized after fleeing the horrible scene with the couple’s five-year-old daughter, who sustained less severe injuries, according to police.

The woman was stabbed numerous times and had to leave her elder child behind in order to escape the house with her younger child and wave down a passing motorist to call the police. Both have subsequently been hospitalized; the child is in stable condition with unclear injuries, while Matthews’ girlfriend is in critical condition.

Authorities discovered the 54-year-old male suspect overdosing on heroin and suffering from self-inflicted wounds in the basement of the apartment.

Officials then administered Narcan, a prescription drug, to revive the suspect, who was then taken into custody. He remains hospitalized and is in stable condition, but he faces a slew of assault-related charges for which police have yet to disclose a motive.

Jim Matthews, the nighttime anchor on WWJ 950, was murdered and his fiancée and two children were injured in what investigators are calling a murder-suicide attempt.

The assault occurred Friday around noon at Matthews’ and his girlfriends’ home on Bayview Drive off Hooker Road in Chesterfield Township, a quiet suburb west of Detroit.

The unidentified assailant was a family friend and frequent guest who had been invited inside the apartment prior to the attack, according to authorities.

Locals and the Detroit news scene are in mourning for the deceased anchor, who served as the radio station’s overnight news anchor for nearly seven years.

The deceased journalist was recalled by his longtime employer as a committed and dependable family guy who was passionate about news reporting during his whole career with the network.

The radio station reported, “He often spoke to coworkers about his children, his affection for them, and their school adventures.”

He was dedicated to WWJ and the radio industry and was a consummate professional. He enjoyed sharing the newest news with his audience.

As a result of Jim Matthews’ unexpected passing, the station noted, ‘there have been many tears shed in our newsroom,’ and ‘our thoughts and prayers are with Jim’s family and friends.

The terrible tragedy has left residents and the Detroit news scene in mourning for the late anchor, who served as the radio station’s overnight news anchor for nearly seven years.

The suspect, identified by police as a 54-year-old family friend who was invited inside before to the assault, remains hospitalized and is in stable condition.